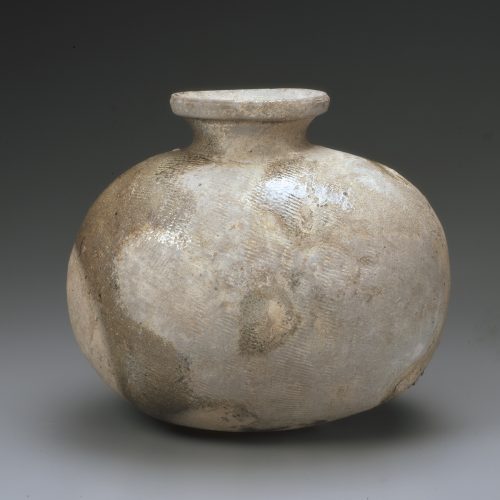 The body of the jar, handmade by coil method, is an irregular, compressed ovoid form, the walls pounded thin with paddle and anvil, the carved head of the anvil leaving clear impressions of repeated spirals on the interior of the vessel and the paddle leaving shallow striations on the exterior. The base is rounded and the vessel is without a foot, resulting in an organic, egg-like form. The constricted neck and circular mouth, with its thick well-articulated rim, appear to have been made on a wheel and luted to the jar’s hand-formed body. The hard stoneware body is somewhat coarse, of grey color, and with flashes and swatches of olive-green glaze brightening certain areas and coating the mouth’s interior as a result of contact with ash during firing.

This unpretentious ceramic jar represents Japan’s early stoneware production, which resulted from ceramic technology introduced from Korea and established initially in Suemura in the Osaka area of the Kansai region. The updraft kilns introduced from Korea were essential in producing the temperatures required for the production of the hard ceramics, and the use of the fast-turning potter’s wheel enabled artisans to form vessels of regularity and balance if they chose to do so, or to finish their work with refined elements such as the neck and mouth of the present jar. The ware’s high firing also resulted in glazes being formed from ash falling or blown onto the vessels by the force of the draft during firing, producing a thin crust of glass or glaze after cooling.[1]

The oblong form recalls the cocoon-shaped earthenwares of Han-dynasty China and related stonewares of the contemporaneous Korean potters.[2] Hidden from view and not intended to be seen, a by-product of fabrication techniques, is the stunning spiral effect on the interior walls of the vessel, beauty by accident, an effect frequently encountered in these wares.[3] The jar and its counterparts in the world of Sueki ceramics also embody features—the natural and earthy, the raw and rough—that would consume the hearts and minds of later ceramic aficionados in Japan.