The Chinese had been importing glass from the West since at least the late Zhou period and by the Western Han had developed a glass-making tradition of their own. Among the numerous glass objects from tombs of that period, usually in imitation of contemporaneous jade objects and accoutrements, were distinctive, cobalt blue-glass earrings, tubular in shape, flared at each end, and pierced lengthwise, as seen also in a pair in the Palace Museum, Beijing (fig. 1). Thirty-six of these earrings were strung together to form the present necklace. Originally the earrings would have been a deep cobalt blue in color and translucent if not transparent. Age has rendered the original bright smooth surfaces somewhat rough and matte, the colors transformed and varied in shade, and each allowing some light to pass through.

Much of the glass from this period has been discovered in modest burials, the earrings themselves in tombs across at least ten provinces. Although not usually buried with the rich and famous, the lovely earrings must have seemed quite exotic and at least would have given whomever the owners a sense of great privilege. 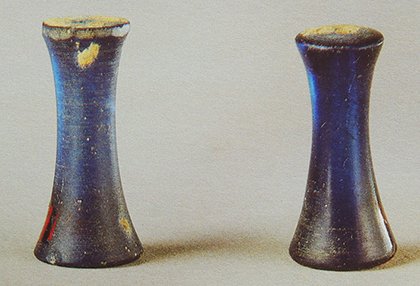