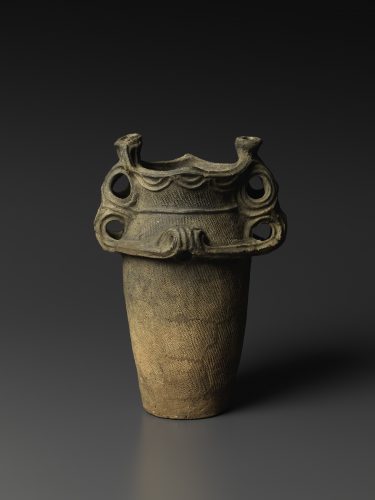 This ancient earthenware jar is formed as a slightly expanding cylinder rising from a flat base, constricted by a rope-band at the neck, and flaring outwards to the mouth with raised-cord swags pendant on front and back. The surface is decorated with impressed or rouletted lines aligned diagonally overall. Thick grooved bands in high relief circle the upper body, coiling into scrolls at center front and back and morphing at the two sides into roughly symmetrical, massive protuberances with large circular perforations. This sculptural confection terminates well above the lip rim where a deep oval depression flanked by hollowed loops marks the uppermost reaches of the décor. The ware is reddish-buff in tone shading to grey toward the neck.

This example of a Neolithic Japanese vessel is relatively small and compact compared to usual Middle Jōmon period jars. However, it possesses all of the features that enabled this period to take a prominent place on the world stage of ceramic art: bold and dynamic, designs executed with skill and confidence, earthy colors and textures, with sparkles illuminating the otherwise matte earthenware bodies.

Regional variations of the ceramic styles called Jōmon, “cord-marked,” have become increasingly well understood through excavated and chance finds over many decades. The Kantō plain has emerged as an extremely active and productive area and is becoming better understood through the immense number of excavations in that area, which, however, does not ease our chore entirely in identifying provenance. The styles were legion, the variations within a stylistic group immense, wide-ranging, and short-lived. The style of the present jar, however, suggests a Kantō plain provenance similar to excavated examples from Nagano to the northwest of Tokyo and Yamanashi to the west.[1]