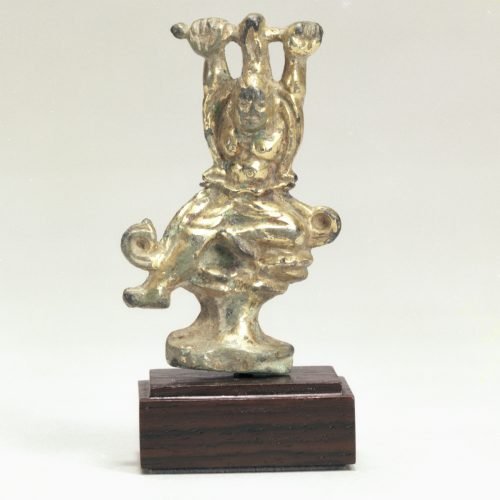 The small muscular gilt-bronze figure with one leg folded and one thrust out is supported on a socle with splayed foot. The arms are raised overhead and grasp a horizontal rod while the hair is swept up to meet the rod as well. The figure is bare chested with heavy drapery around the shoulders and below the waist. The gilding is strong in front and absent on the reverse.

Small gilt bronze figures were often attached to large Buddhist assemblages or altars as attendants or guardians for the main deity. Guardians are often depicted in dramatic poses and muscular figures are seen hoisting such objects as incense burners. This small figure fits both bills but stands apart due to its unusual posture with both arms raised overhead. Noteworthy too is the careful and precise modeling, exemplary in such a small figure.