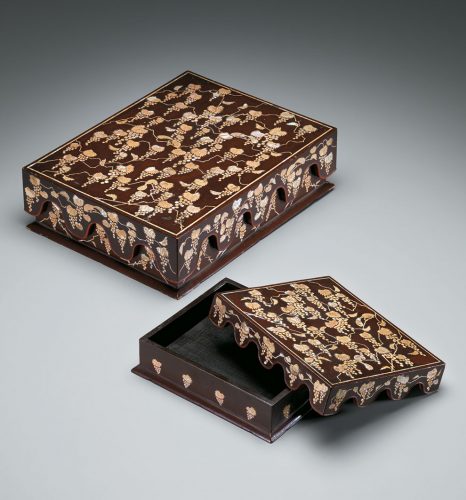 The boldly decorated rectangular box set includes one large and a matching smaller one. The larger box is raised on a low platform with bracket feet, covered with a reddish-brown lacquer on the outside and black on the interior, with red lacquer edges bordering the cover to highlight the scalloped overhang. The inlaid decoration is brilliantly conceived using repeat patterns in such a way as to achieve a lively variety across the surface of the lid. The mother-of-pearl is inlaid in a jagged lightning-like design to represent a pattern of vines, its leaves with jagged edges, and grapes represented by cascading dots of different sizes. Three squirrels can be seen on the vines: two stretched out as each creeps along a vine, mirror images of one another, and a smaller squirrel perched below, its body hunched over and its tail pendant. The fur of the small rodents is roughened with incised marks and the veins of the grape leaves are incised in the same manner. The long sides of the lid of the box are inlaid with a horizontal decoration of squirrels and grapes using the two types of squirrel as templates. The short sides are also decorated with the grape-vine motif with a single stretched-out squirrel balanced in the center of each side. The receptacle or bottom section of the box is decorated with detached clusters of paired leaves each with a bunch of grapes, positioned to be framed by the overhanging scallops of the lid when the box is closed. The inkstone box is similarly constructed and decorated, the only difference being the fewer number of motifs used due to the smaller size of the box. The mother-of-pearl on each reflects pastel shades of pinks and greens.

An intriguing feature of the present boxes, and the small number of comparable published examples (figs. 1-4) is the dynamic design of the lids that drape over the receptacles below, much like a decorative cloth would cover a table or a chest. The scalloped or swag boarders overhanging the recessed sides of the receptacles create a sense of stability while also providing a lively rhythm and decorative flourish. This peculiar manner of fashioning lids for boxes appears to have been developed by the lacquer craftsmen of the Ryukyuan Islands. The inspiration might have come from Japanese lacquer boxes where lids related to the boxes here have their bottom edges cut to frame handles.[1] The descendants of the 17th-century Ryukyuans who created these lacquer stationary accoutrement maintain that the Japanese had minimal impact on the development of their lacquer traditions, preferring to ally themselves with their Chinese neighbors instead, leaving the question concerning the origin of the unusual form of these Ryukyuan writing boxes answerable in more than one way.

The comparable boxes differ from the present in their use of gold paint to produce the vines and tendrils and thus a fluid calligraphic effect results whereas the inlaid mother-of-pearl tendrils of the boxes here produce a dynamism of their own, the inlaid shell reflecting light and zigzagging in an animated, spirited way. A box with hinged lid in the Metropolitan Museum with fruiting grape vines decoratively draped over the lid of the box onto the receptacle is the haunt of various small creatures including a single squirrel in the minimal garden setting below.2 The tendrils and vines were produced with inlaid mother-of-pearl and the grape leaves are in large scale as in the present box, in comparison to those in figures 1-4, where, it might be noted, the animals are minuscule.

Whereas the fruiting grape motif had graduated from being an exoticism during the 7th-8th century in China to part of the general lexicon of “natural” motifs over the centuries, the squirrel itself appears to have begun with deeper meaning. Chinese painters depicted squirrels at least by the 14th century, usually among pine, bamboo or chestnut trees. Soon after, grapevines dangling delectable fruit were adopted as a perfect environment and visual foil for the squirrels. The squirrel was imbued with symbolic meaning in the Chinese mind: the animals were symbols of the small-minded Mongol conquerors who were gobbling up China and hoarding her riches, much as the scampering squirrels are dining willy-nilly on the sweet fruits. Chinese paintings of squirrels and grapes are preserved by and large in Japan and had likely been transported there during the 14th century by Japanese monks returning from their studies in China. It is most likely that such paintings also reached the Ryukyu Islands during this time of intense trade between the various East and Southeast Asian neighbors. The squirrel-and-grape motif was easily adopted because of its lively and charming nature, its visual richness and its exoticism.

The Ryukyuan chain of islands, known as Okinawa since annexation by the Japanese in 1872, stretches from south of Kyushu in Japan to Taiwan. A spike in lacquer production is associated with a close association with Ming dynasty China during the 14th century andfrom then on the mainland artisans served as teachers and their wares functioned as the major models and inspiration for the developing lacquer industry. Ryukyuan lacquer workers, however, did not copy the models blindly or passively. Rather, they developed independent and creative techniques that eventually set their lacquer apart from the products of China and Japan. For example, the Ryukyuan craftsmen never produced carved lacquer but, on the other hand, devised a way to produce more intense colors by means of boiling the shell material.[3] And, in the present boxes, creativity and independence are expressed both in the structural design of the boxes and in their decor—grape vines like shocks of electricity and grape leaves with their threatening saw-tooth edges, which appear to have done little to keep the pesky creatures at bay. 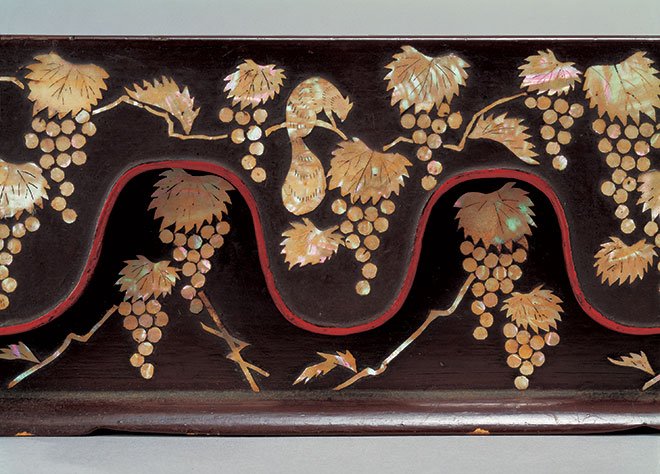 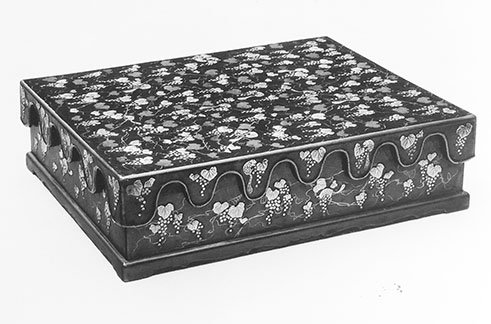 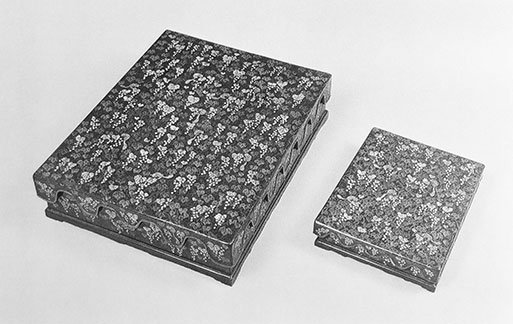 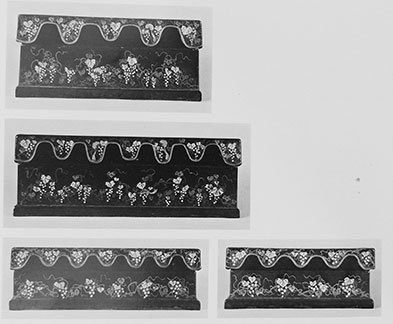 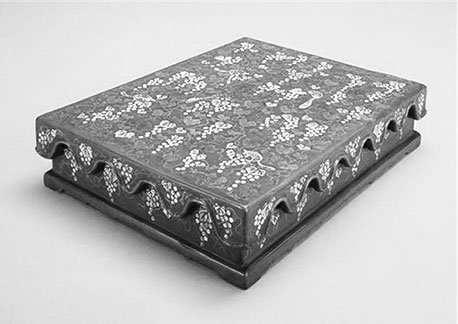