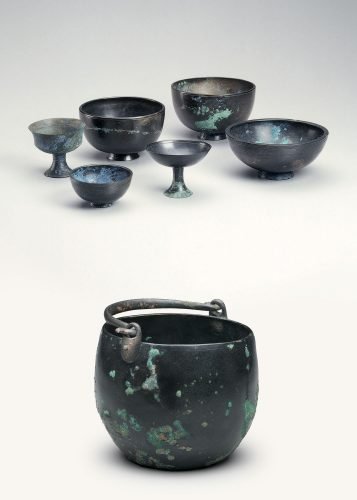 The handsome group consists of four bowls of varying sizes, and two stem cups, all thin-bodied and the metal characterized by its dark steely-grey color, smooth surface and fine luster. All the surfaces and interiors are lightly encrusted with a bluish-green patina that resembles continents and archipelagos on shiny black globes. The largest bowl is deep with straight sides raised on a precise and widely splayed foot and with a simple groove below the rim. The second bowl, somewhat smaller in size, is similarly made, but with an incurved rim while the third bowl is wider in diameter and shallower with a series of bowstring bands below the sharply incurved flat rim. The smallest bowl is exquisitely cast as are the others, of fine proportion, with a series of engraved line borders above the foot and below the flat rim. One of the stem cups has an incurved and angled bowl with flared sharp rim, raised on a splayed hollow stem foot cast with thin ridges, while the other is formed as a shallow wide-mouth bowl on a high splayed foot. The bucket, fashioned from a similar deep grey metal, is of deep ovoid form set with upright rings and a U-shaped swing handle with curved terminals. The base is slightly concave.

A group of vessels comprised of small vessels similar to the group here, but including a bottle with its delicate cap, was published in Japan (fig. 1) as were a number of buckets with swing handles, two illustrated here (figs. 2-3). All of these vessels are extremely subdued in effect and strikingly modest in material and style, especially in contrast to contemporaneous products fashioned from precious metals with lavish decor that had thoroughly captured the imagination of the elite, not only in China but also abroad. In fact, the finds from one shipwreck in particular has widened our understanding of and appreciation for the immense achievements of metal ware artists in Tang China.[1] It is somewhat surprising that such exquisite creations as found in the wreckage did not make it directly to the palace in Chang’an. And we wonder for whom these exceptional treasures were destined.

A more important consideration her e, however, is the value, artistically and culturally, of these unobtrusive vessels that developed seamlessly from precedent 6th-century A.D. vessels and then settled historically into the shadows, almost as if they were willing the brightness of other achievements to shine forth. If they do not reflect the glories, luxuries and extravagances of the here and now of Tang life, it is because they were not meant to. Rather they exist in the more distant reaches of a Buddhist spiritual existence, one that also played a part in the Tang psyche. It is not surprising then that the kundika, a vessel intimately associated with Buddhism, was produced almost exclusively in this style of bronze, not only in China but also in Japan (fig. 4) where vessels and implements in this style are used even today in Buddhist ritual.

The reserve embodied in the shapes and design of these metal vessels, the absence of decor, and the purity and simplicity of form was in fact an aesthetic adopted by contemporaneous potters and reflected in ceramic shapes corresponding to many of the bronze vessels. Whether in the Yue celadons of the south or the Xing white wares of the north, the latter exemplified here in finds from the foundations of a pagoda at a Buddhist temple in Dengfeng, Henan province (fig. 5), the path of these ceramics through the Tang was unencumbered with accoutrement. The bronze style here can also be credited with the blossoming of an exquisitely pure and refined early Song lacquer style (see cat. 53) and thus appears to have been the gift that keeps on giving. 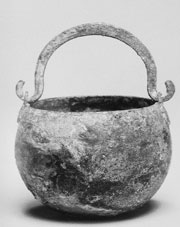 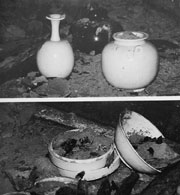