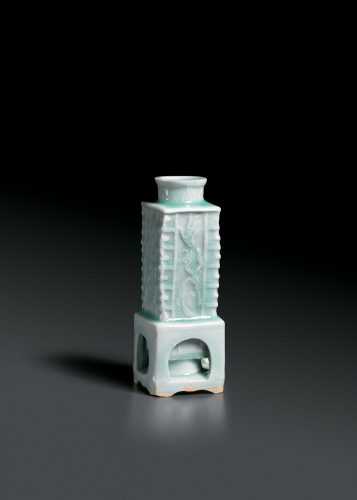 The archaistic Jade shape, square in cross section with tubular neck and foot, is fashioned as a small vase enclosed toward the base by a square stand with arched openwork sides, the base of the cong visible through the rounded apertures. Each of the four sides of the vase is molded with a central panel enclosing a dragon in pursuit of a pearl, the panels flanked by raised corner brackets. Upright triangular blades decorate the neck above a squared flat shoulder. The glaze is of superior quality and covers the vase and stand, translucent turquoise on the shoulder and top of the stand, thinning to bluish white over the sides and still paler over the raised molded decoration. The base is closed and unglazed revealing the fine white porcellanous ware marked by a burnt ring where the piece was supported during firing.

The present vessel has counter parts in yingqing wares discovered at sites in China, for example, in Sichuan province (fig. 1) and at the Hutian kiln site in Jingdezhen (fig. 2), and from the export market, the example illustrated here from the Philippines (fig. 3). These small yingqing wares, often based on ancient bronze shapes, are normally ascribed to the Yuan period. This dating is supported by related vessels from Jingdezhen among the vast ceramic cargo carried by a Chinese ship that set off from Ningbo in A.D. 1323 for Japan and possibly Southeast Asia. The voyage ended in disaster as the vessel sank off the coast of Korea. The discovery of the wreckage led to the recovery of thousands of ceramics including pieces relevant to the present cong given their archaistic shapes and the stands supporting them (figs. 4-5). Another group of related pieces was found among goods buried in a hoard in Sichuan province, likely to safeguard them during the strife accompanying the Mongol invasion and conquest (figs. 6-7). Interestingly, a good number these ceramics might be judged higher quality than those on the Sinan ship, whether that be a function of time, market, or source (the workshop producing the wares), the present vessel is commensurate with the former in refinement and quality.

The cong forms that we are quite familiar within Chinese ceramics are celadons from the Song- Yuan dynasty produced at the Longquan kilns (fig. 8). Since these vases are undecorated, as are a majority of the ancient jades on which they were based, we might forget that some Neolithic period jade cong, those, for example from the Liangzhu culture, did in fact have pictorial decoration in the form of faces or masks, the eyes the most prominent features (fig. 9). A pair of very rare stone cong contemporary in date with the present yingqing cong and similar in size, were found along with the ceramics from the hoard, dubbed the “Time Capusle,” discovered in Sichuan (fig. 10). These unusual stone cong were brought up to date by their decorator through the carved design of rhythmic abstracted waves displayed on all four sides.

The archaeological interests of Song-period scholars, who both prompted and were stimulated by excavations of ancient sites conducted at that time, also peaked the interest of the wider society. Ritual bronzes of the Shang and Zhou period and the Neolithic jade cong were then imitated in ceramics that became popular at home and abroad. The tiny dragons on the present cong, in fact, are reminiscent of the kui or dragons found on these bronzes. The dragon “chasing the pearl,” however, was introduced at a much later time, possibly not before the Tang period.1 Some are still debating whether dragons really “chase” pearls or rather spew them forth as riches and charms, the logical result of the dragon’s boundless beneficence.