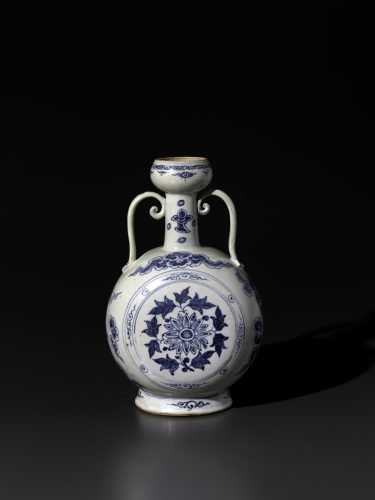 The circular drum-shaped body is supported on a flared oval foot and surmounted by a tall cylindrical neck with bulb-shaped mouth. Attenuated scroll-shaped handles are attached on each side. Decorated in underglaze blue throughout, the front and back of the vessel’s body are painted each with a large chrysanthemum blossom within a lively wreath of leaves all enclosed within a double-line border punctuated with scroll segments. Large foliate clouds, based on ruyi forms with trailing vapors, are arranged above the main medallions on front and back and on the sides, with scroll segments on the foot, handles, and bulbed mouth where flaming pearls are also painted along with geometric symbols. Lighter and darker shades of blue are applied in outline and wash with some motifs more carefully penciled, all seen through the bubbly glaze, which exhibits a slight orange-peel surface. On the base the glaze is thin within the unglazed foot rim where iron impurities are visible in the light greyish-white stoneware body.

There were no “moon flasks” on the block during Butterfields (now Bonhams) sale of well over 2000 15th-16th century Annamese ceramics salvaged from the Hoi An cargo ship that sank in the South China Sea off the coast of central Vietnam. The 200,000 ceramics on that ship provided a handle for understanding more clearly known types, while bringing to light hitherto unknown categories as well. Perhaps such moon flasks (alternately called “pilgrim flasks” in recognition of their origin) were present amongst the salvaged cargo but were dispersed elsewise or they might not have been included in the original cargo at all. The flasks are quite rare and of very high quality and might have been made in limited editions. The present example is from an old Indonesian collection. The published examples, very few and far between, are decorated with peony blossoms, far more common in Annamese underglaze-blue decorated wares in general, and include one excavated in the Moluccas, now in the Museum Pusat in Jakarta (fig. 1) and another in the Honolulu Museum of Art (fig. 2). The chrysanthemum motif appears, however, on contemporaneous large dishes (fig. 3) as well as the flat lids of containers, such as those found in quantity in the Hoi An hoard (fig. 4).

The underglaze-blue decorated porcelains produced at Jingdezhen during the early Ming period were teacher and textbook for the Annamese potters during the 15th century, when the present flask was created. They tailored the intriguing Ming dynasty moon flask forms enough to create derivatives that are quite distinctive. The elongated gourd forms that surmount the necks of the Chinese flasks (fig. 5) were turned into globular shapes and the short handles of the Ming vessels grew into elegant sweeping curves. The wreath arrangement of the leaves around the blossoms so frequently seen in the Annamese wares likely derived from the floral boughs present initially in Yuan period underglaze-blue wares where they were somewhat more naturalistic in disposition (pl. 6). Differences in the clay materials (stoneware clays in contrast to the Chinese porcelain), the source and quality of cobalt—usually greyer in tone than the Chinese, and the style of painting each contributed to producing individuality as well. The occupation of Vietnam by the Chinese for a two-decade period during the early 15th century along with a Chinese ban on exports greatly impacted the Annamese ceramic industry, as evident in the production of the underglaze blue-decorated wares under discussion here, and also allowed China’s southern neighbor to become a major player in the world market for these wares. 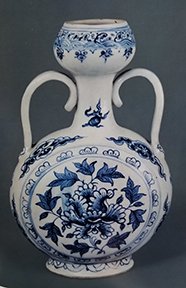 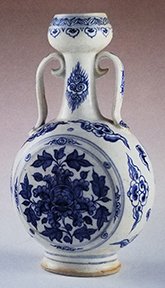 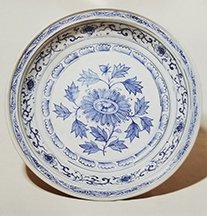 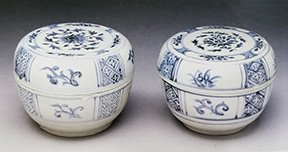 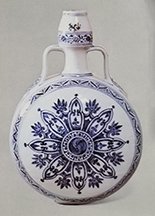 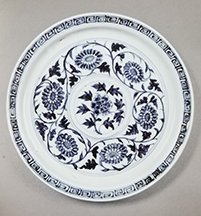