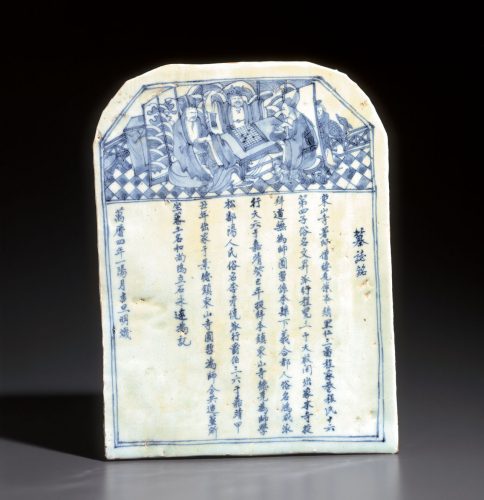 The flat porcelain plaque is in the form of a stele, arch-shaped above and straight on the sides, with a funerary inscription written below and a figural scene above, all in underglaze-cobalt blue. The hexagonal double-line border corresponding to the outline of the plaque encloses the inscription at the bottom which is written with a three character title followed by seven lines and a final line giving a date, corresponding to A.D. 1576, and above a design focusing on three figures seated at a game of weiqi. One gentleman on a stool holds a receptacle for the game pieces. Across the table a crowned figure appears to be winning, his hands raised in triumph. To the left a more subdued opponent in official garb is seated on a cushion. The figures are gathered on a tiled floor in front of a paneled screen decorated with cresting and scalloped waves, a servant and deer are half hidden off to the side, all on a balustraded terrace. Pale to darker washes of cobalt pigment are brushed within the outlines which range from more precise, careful, and purely descriptive delineation to the greater expressiveness in the rendering of the principle figures. The front is covered with a glaze that is clear, bright, and smooth, with a dense gathering of bubbles and a bluish cast throughout and exhibiting some minor surface blemishes. The reverse is unglazed, burnt orange in the firing, relatively rough in texture, and with adhesions that suggest the plaque was stuck to another object, either a support of some kind, or a wall where it was mounted like a tile.

The monk Deyao from Shuqiu at Dongshan ‘East Mountain’ Temple was from this district’s Rensan neighborhood on Cheng Family Lane. Master Cheng was in the sixteen (generation), the fourth son; his secular name was Wensheng, ‘Ascending in Literature,’ and he belonged to the clan of Cheng Lansan. After a revelation he left his home and became a monk at this temple, honoring Daowu as his teacher.

Yuanxian was from Hexiayi in this province. His secular name was Hongjian and he was sixth in the tien rank in his clan. During the year 1533 of the Jiajing reign-era, he honored the Dongshan monk Deyao of this district as his teacher.

Xuesong was from Boyang. His secular name was Li Yanjiao, and he was thirty-sixth in the juebo rank in his clan. In the year 1534 he left his home and became a monk in the DongshanTemple at Jingdezhen with Yuanzhe as his teacher.

We provided them with a joint tomb, under the direction of the famous monk Wu, and set up this stone to record them for all time. On an auspicious day during the tenth lunar month of the fourth year of the Wanli reign-era (1576), Mingji.'[1]

It appears clear that Mingji, whose authored the inscription, was a fellow monk residing at the Dongshan Temple in Jingdezhen where the tomb tablet was produced, and entrusted with the responsibility of creating permanent tributes to and burial of the three deceased brethren. The ‘stone’ set up to ‘record them for all time’ would have been the stone stele carved and erected at the tomb, where the ashes of the monks were interred, whereas the porcelain tablet was intended for burial. An almost identical porcelain tablet with the same inscription, was discovered among refuse at the Jingdezhen kiln, the hub of underglaze- painted porcelain manufacture since the late 13th century, and the Jingdezhen area the site as well of the temple and burial (fig. 1). Why, we might ask, would there be two almost identical tomb tablets for a single tomb? Clearly the Jingdezhen find was produced first. However, having suffered damage during production—the bottom portion of the inscription almost completely defaced below the marred, gritty, discoloured glaze—a replacement piece was needed for burial and therefore a second tablet, the present one, was manufactured.
That the present plaque was produced during the Wanli era would be clear enough from the character of the scene depicted–each and every figure, motif, and detail, the color and quality of the blue, the manner in which the blue was applied and the character of the body and glaze. These characteristics are typical of a Wanli product for non-imperial consumption. In contrast to these tablets stylistically is a large fragment from the upper corner of a funerary plaque discovered at Zhushan at Jingdezhen, a waster as in the excavated example above (fig. 2). From the portion of the inscription that survives, we learn that the tablet was made for an official actually posted to Jingdezhen during the Wanli reign era, one of great enough importance to be recorded in the Mingshi (‘Ming History’). The shard is from what would have been a very high-quality porcelain product, decorated, in contrast to the examples above, in a much more carefully executed style and with a richer, brighter blue, as we would expect from the imperial workshop established at Zhushan already at the beginning of the Ming dynasty. And it is obvious from the dragons represented here that the five-clawed variety was not, at this time, reserved solely for the emperor.

As Jingdezhen slipped further from the radar of imperial interest in the post Wanli period, a wide range of wares, including such commissions as represented by the type of funerary tablets here, were essential, along with the markets being nurtured abroad, for the survival of the porcelain industry. During the Tianqi period (A.D. 1621-1627), when private kilns at Jingdezhen were replenishing their coffers from booming sales to the Japanese, their calligraphers were busy at work turning out funerary tablets for the local market as exemplified by one dated to the first year of the Tianqi period (A.D. 1621) (fig. 3), and another to the seventh year of the Tianqi era (A.D. 1627) (fig. 4). That the business continued into the next reign is evinced by another example with a date corresponding to A.D. 1632 of the Chongzhen reign era (A.D. 1628-1644) discovered in a tomb located in the suburbs of Jingdezhen (fig. 5).

In addition to epitaph tablets, funerary land deeds have also come light, for example one in the British Museum dated to A.D. 1626 of the Tianqi period which records the ownership by the deceased of the very land in which she is buried (fig. 6).[2] The inscriptions therefore were meant to introduce the deceased to the inhabitants and overseers of the afterlife, to establish his or her reputation in the afterworld, and to ensure that the deceased were entitled not only to respect, but, in the case of the land deeds, ownership of their underground realms. With the Buddhist monks, however, for whom the present tablet was made, concerns for their afterlives were quite different and ownership of anything attached to this mundane world would not be among them.

1. The inscription was translated by Howard Rogers. Thanks are also due to Kazuko Kameda-Madar and Hiroshi Kawasaki for assistance with transcribing the inscription. 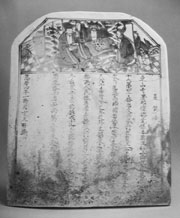 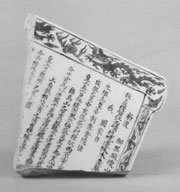 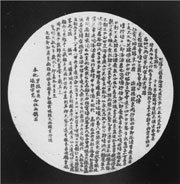 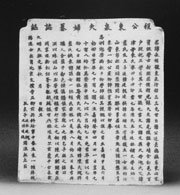 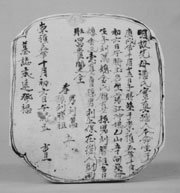 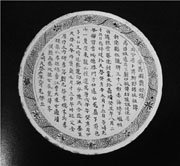