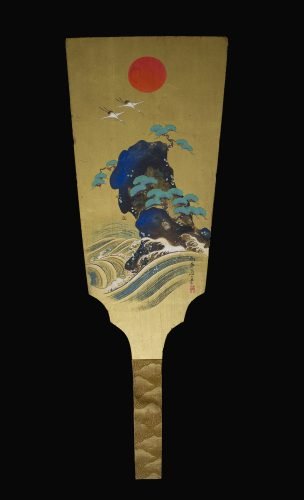 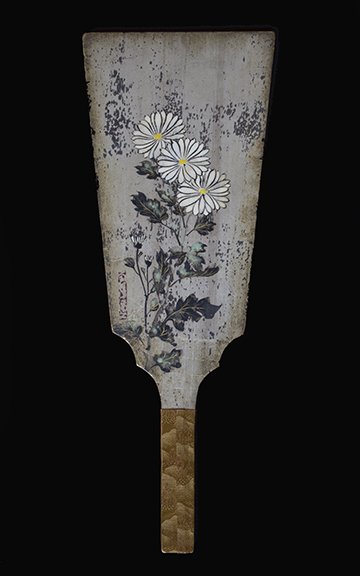 The wooden racket is painted on one side with a scene of Mount Horai with a tortoise scrambling up the rockwork island with cresting and crashing waves below. Shades of brown and deep blue are allowed to puddle and pool on the surface, a technique known as tarashikomi, to form the land masses, with green pine trees and randomly dotted lichen. Two cranes hover in the sky beneath a red sun, all on a gold ground. The reverse is painted with three chrysanthemums blossoming from a single stem in white with centers dotted yellow, their elegantly long stems issuing leaves of pale green and brown with delicately brushed gold veins, all on a silver ground that appears rubbed. The handle is wrapped in figured brown silk.

Shuttlecock was a favorite New Year’s season pastime, captured in Japanese paintings over the ages (figs. 1-2). The present battledore was likely produced as a New Year’s gift, and in the spirit of that painted by one of Dōitsu stellar predecessors, Suzuki Kiitsu (1796-1858) (fig. 3). Kittsu himself, along with Dōitsu’s father, was a student of Sakai Hōitsu (1761-1828) who established the Uge line, its mission to carry the Rimpa style of Ogata Kōrin (1658-1761) into the 19th century. Dōitsu became the fourth master of the line in 1866, and brought the style into the 20th.

Whereas Kiitsu revived an ancient Fujiwara style on his battledore, as did Ninsei in his kogo, (cat. 23), Dōitsu executed his battledore in updated Rimpa style to illustrate a favorite Rimpa subject, Mount Horai. Dōitsu had painted the same subject and almost precisely the same composition in ink and color on silk, a painting in the Kaikodo collection (fig. 4).1 Mount Horai, with its forests of cedars and cypress, is actually in Aichi prefecture, but is also thought of as the Japanese Penglai, which is the Chinese mountain home of the immortals. The pines, tortoise and cranes inhabiting the scene are harbingers of longevity, of immortality, which would make the battledore and the painting quite auspicious ones. In discussing the painting, Howard Rogers noted, “…such mountains “…functioned in painting as manifestations of the hopes of well-wishers on such auspicious occasions as weddings, birthdays and the beginning of the New Year. Japanese of course sill live on islands in the eastern seas, and their country is in fact ‘The Land of the Rising Sun,’ so it seems quite appropriate that images of Mount Horai, as they call Penglai [the most famous of these mountains from the Han dynasty onward], are frequently hung even today in tokonoma alcoves during the New Year Season.”2 Along with such motifs that are forever associated with wishes for longevity and prevalent during the New Year’s season, the battledore itself entered their domain, as illustrated here in an overglaze-enameled footed Kutani bowl for the New Year’s season decorated with pines, cranes, a tortoise, and battledores with shuttlecocks.

The painting on the reverse references the dazzling Rimpa flower painting tradition represented by such works as Kiitsu’s image of chrysanthemums in the Boston Museum of Fine Arts (fig. 6). 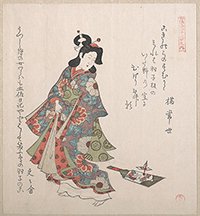 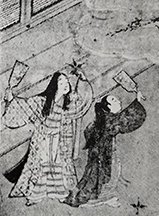 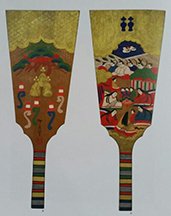 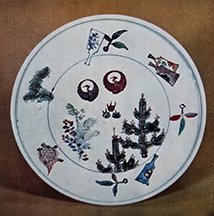 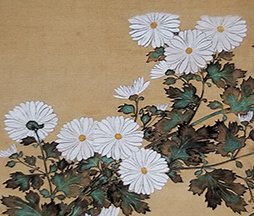