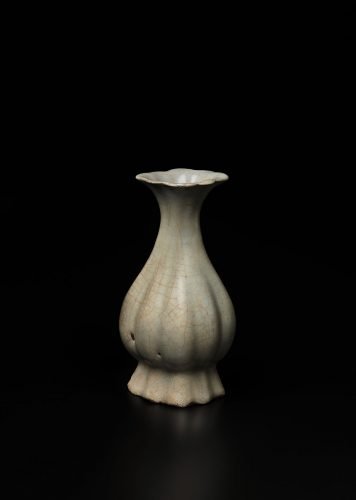 The vase is of flattened pear form divided into eight lobes extending from the oblong foliate, flared lip to the high, hollow foot of matching shape. In natural light, the thick glaze is a soft pale bluish grey with irregular meshed crackle of reddish-buff on the body, paler on the interior of the mouth and a whitish crackle of finer network on the foot. The characteristic thickness of the glaze can be seen where the glaze pulls back on the body leaving small gaps and pinholes that also expose the body burnt a reddish-brown color in the firing. The dark grey stoneware is visible where the glaze is abraded on the lip. On one side of the vase the glaze is lustrous and on the reverse more matte. The square-cut foot appears somewhat irregular and glaze has spilled over it in certain areas. The interior of the foot and deeply recessed base are fully glazed.

A number of ceramics similar to present in museum collections, for example in the Seattle Art Museum (fig. 1) and the Palace Museum, Taipei (fig. 2), have been attributed to the Jiaotan kiln located at Tortoise Hill on the outskirts of Hangzhou, capital of the Southern Song (A.D. 1127-1279), where similar wares have been discovered during kiln site investigations (fig. 3). Wares discovered at various sites in Hangzhou, some claimed to be from what is traditionally called the Xiuneisi, or “Bureau of Household Affairs” kiln (fig. 4) are, along with the Jiaotan wares, classified as guan, or “official,” ware made under the auspices of the court. They are typically dark-bodied stonewares with multi-layered, thick, opaque, unctuous, crackled glazes ranging in color from off-white to greyish white to grey to bluish- and greenish-grey to celadon blues and greens and to buffs and even pale brownish hues.

Major issues weigh upon a clear understanding of the “imperial” crackled-celadon style and what overall comprises guan or official wares in a broader sense. The Jiaotan, or “Altar of Heaven,” kiln was established (actually over an earlier non-official kiln that produced Yue-style wares) sometime in the 1140’s under the direction of the Gaozong emperor, son of the last Song ruler in the north, the Huizong emperor. While the Jiaotan kiln was discovered decades ago, the discovery of kilns at Fenghuashan, “Phoenix Hill,” known through literature and tradition and established somewhat earlier than Jiaotan, was longer in coming. In what has been judged one of the most important archaeological events in modern times in China, the site was discovered in the late 1980’s. Seven kilns along with the foundations of workshops, tools and ceramic remains were uncovered in an area known as Laohudong, “Cave of the Old Tiger,” a site identified by some as the official kiln, the Xiuneisei kiln, described by Southern Song writers. Some fragments found among the remains were inscribed with the characters guanyao, “official kiln,” and one or more with the characters Xiuneisi, the office initially in charge of the kiln’s operations. This production site, in the Houyuan or “Rear Garden” area of the palace, the traditional site for palace workshops, would have been established sometime after A.D. 1138 when Hangzhou was declared home for the displaced Song imperial court.

The establishment of southern kilns and the nature of the ceramic style that was the specialty there resulted from the Gaozong emperor’s need to recreate the dynastic traditions and paraphernalia of the Song court in Kaifeng. The crackled celadon wares favored by the northern court during the last couple of decades before the invasion of the Tartars were the models to be emulated—whether they were produced at Ruzhou, where kilns have been excavated, or at imperial kilns in Kaifeng, where no kilns have been found yet. The story of southern guan ware is understood not only in relation to the wares it emulated— similarities and differences have been studied and written about extensively—and how a distinctive “southern” guan style was developed, but also in relationship to Longquan production. A hoard of ceramics found in Sichuan province, probably someone’s shop inventory hastily buried during the Mongol invasion in the later 13th century, consisted of ceramics that were from Jingdezhen and Longquan. Two of the over one-thousand ceramics published from this hoard are relevant here. One is easily identifiable as a Longquan celadon given the character of body and glaze (fig.5). Yet the other, also attributed to Longquan, has a dark body and a crackled greyish-blue glaze and looks for all intents and purposes like what is usually thought of as guan ware (fig. 6).

The powerful impact of official style on commercial kilns, and the conscious imitation of au courant official styles, make attributions difficult. The thick, jade-like crackled glazes were not difficult for Longquan potters to imitate nor were the dark bodies. Further, Song dynasty official kilns in Hangzhou did not cease operation with the fall of the Song to the Mongols but continued to operate into the Yuan dynasty (A.D. 1279-1368), creating a further dimension to consider within this complex world of “guan” ware style.

The absolute thinness of the body of the present vessel, however, and its close similarity to what are, hopefully (to quote Sherman Lee), correct attributions to the Hangzhou kilns, indicate it is likely a product of one of those kilns. Some irregularities in the foot, which has not been finished to perfection, and the separation of the glaze in certain areas, suggest the piece might have been left at the kiln as a waster.