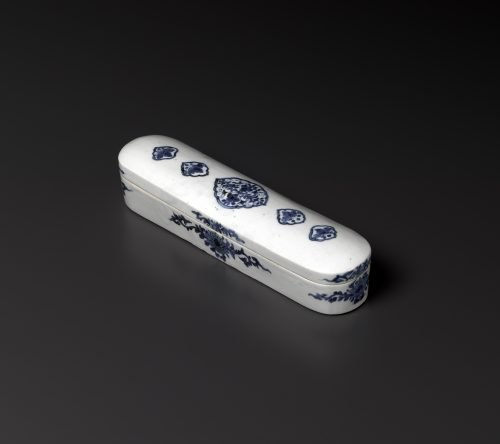 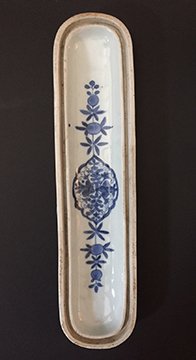 The oblong covered porcelain box has rounded ends with the interior of the receptacle divided into a longer and shorter section by a partition running the width of the piece towards one end. The decoration is produced in delicately brushed cobalt blue: the top of the lid with a central large quatrefoil infilled with a symmetrical design of flowers, leaves, and tendrils flanked by pairs of smaller quatrefoil panels, each panel containing a trefoil-form leaf, each long side and rounded end with an elongated scrolling foliate bough while a quatrefoil mirroring the top of the lid appears on the lid’s interior, a straight line stretching lengthwise from each point, punctuated with pairs of rounded blossoms and leaves. The bottom, or receptacle, is decorated on each long side with a large lotus blossom issuing formal scrolls to left, right and above while a reduced version of the same motif decorates the rounded front and back ends of the vessel. Outline and wash are used throughout, the brushwork carefully articulated in some areas with blue wash more impressionistically applied in others, the blue with a slight greyish tinge against the white porcelain. Receptacle and cover are glazed overall aside from the flat unglazed base as well as the mouth and lip rims where lid and receptacle fit together. The fine white porcelain exhibits some greyish and black speckling where exposed and the rather thick, milky, glaze with a slight bluish tinge is not quite uniformly applied and has crawled in some areas.

The box is believed to be an Edo period product of the Kutani kilns in old Kaga province, current Ishikawa prefecture. “Old Kutani” is synonymous with massive, brilliantly colored, boldly designed overglazed enameled porcelains that dominated production during second half of 17th-century when the kilns were in operation. However, parallel to these celebrities of the Kutani world were alternate styles, known through extant pieces and excavations of kiln sites near the village of Kutani. These include examples with colored glazes as well as underglaze painting in iron, copper, and cobalt. Excavated underglaze-blue decorated ware from the 17th-century Kutani kiln sites appear to be dominated by restrained yet naturalistic motifs, delicately painted, on porcelains fashioned from raw materials brought in possibly from the Arita area, thus explaining the high-quality body of a footed bowl from the kiln site illustrated here (figs.1-2). Legend has it that the daimyo of Kaga, the Maeda clan, the kiln sponsors, sent a potter to Arita to learn the secrets of the potters there. The knowledge he acquired would have included insight into Chinese export styles and European tastes. This resulted in similarities between certain categories of Arita and Kutani wares, and likely accounts for the style of the present example.

Three points can be made about the style of the present writing box. First is the brushwork, which exhibits similarities with some products of Arita, such as that on a fan-shaped box where the delicately brushed design was executed with outline and light wash in a muted blue, like the present (fig. 3). Secondly, the design is organized through use of the ogival-arch or quatrefoil panel. This compositional device, of Near Eastern origin, was an important one in the early underglaze-blue decorated wares produced during the 14th-century under the Yuan dynasty in China (fig. 4). This contrivance was never eliminated from the toolkits of Chinese artisans and can be seen in an illustration here of a Chinese underglaze-blue writing box of the early 15th century, the elongated oval shape itself a precursor of the present form (figs. 5-6). The third point rests in the character of the floral motifs which strike us as very much like the decoration typical of underglaze-blue decorated porcelains of the late 16th-early17th century produced in China for export primarily to Europe (figs. 7-9) and the 17th century Japanese derivatives produced in Arita (fig. 10). The Kutani writing box was thus a product of an international world of porcelain production and consumption during the 17th century when parallel lives were both numerous and interactive. 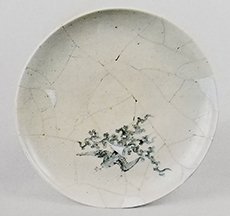 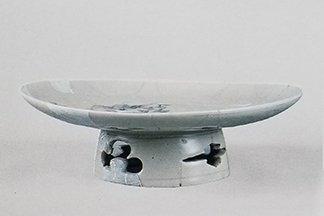 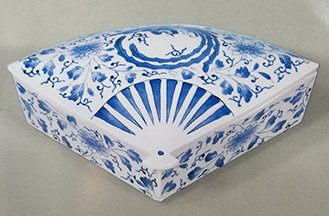 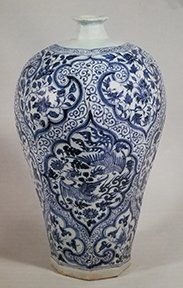 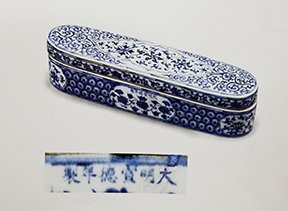 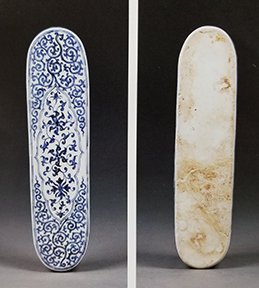 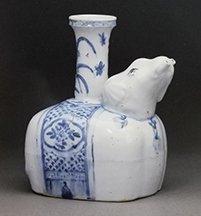 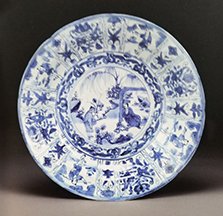 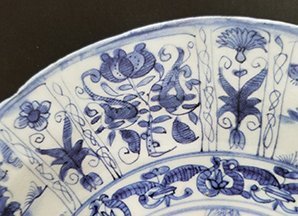 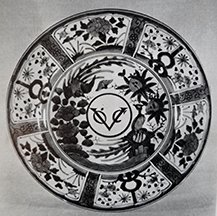