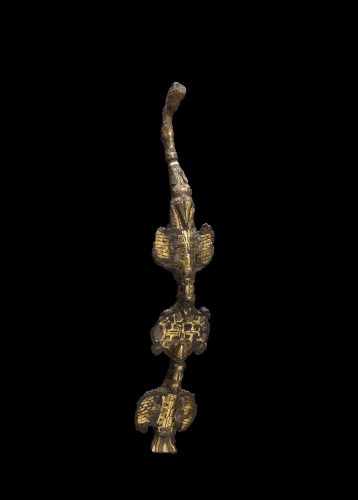 Mysterious and powerful symbols are incorporated into this belthook formed by two combating birds having a tug of war over a turtle carapace. The ancient garment hook is long and slender and composed of two birds with wings spread and tails fanning out, the feathers formed by applied strips of gold. The thick muscular necks provide support and strength as the birds bite into the turtle with their massive hooked beaks. The bodies are heavily plated with two rows of gold spirals. The turtle is flattened with interlocking ‘T’ and spiral motifs on the shell, its four feet splayed. On the obverse, the button is cast amid heavy encrustation. Remnants of banding and vertical inlay both in gold are visible on the shaft beneath the curved hook, which is now somewhat distorted.

Due to the fragile nature of old iron, articles produced from that material rarely survive intact over long periods of time and it is fortunate if they survive at all. Despite corrosion, the present garment hook has come down to us with form and décor intact. Although it might seem odd that iron was used to make personal adornments, a good number of such accouterments do survive.[1] Each of these iron garment hooks is decorated with an overlay of gold or gold and silver set down in geometric patterns. In some of the examples the juxtaposition of bright precious metals and the corroded iron seems quite incongruous. However, the iron in its original state would have provided a handsome base and foil for the gold décor. The question is why would a society so adept in the working of bronze turn to this other medium?

According to Thomas Lawton, iron was used to produce luxury objects as early as the Warring States period and “It is characteristic of the ingenuity of artisans of the period that they would combine iron, which earlier had been used principally to cast utilitarian farming implements, with precious materials, including gold, silver, and jade.”[2] Dr. Lawton also refers to examples excavated in pristine condition: “The contrast between the iron and gold and jade inlay indicates the sumptuous visual effect that prompted the use of iron for luxury objects.”[3] And, further, “…. the contrast between the two metals is extremely pleasing and by studying these hooks one can better understand the appeal iron had for Chinese artisans who enjoyed experimenting with new and unusual materials.”[4]