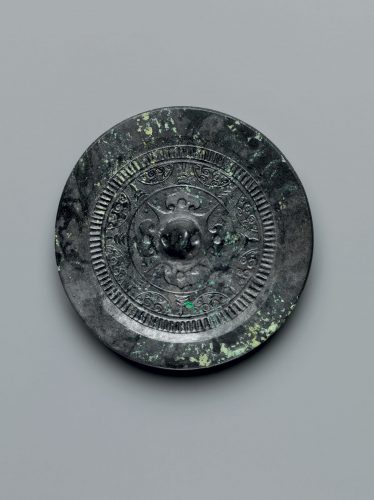 This small mirror is thinly cast and exhibits now a “water patina” on its surface, on the reflecting side resembling black marble shot with light green. The central knob is enclosed within a flat relief quatrefoil surrounded by eight arcs containing whorl motifs divided by stupa-like motifs surrounded by a border of short radiating lines and finished with a raised rim. The label on the mirror’s wooden box written by a former Japanese owner, and further labels associated with mirror, refer to it as an “Eight Cloud” mirror. Likely the eight arcs filled with whorls have led to that appellation.

A number of related mirrors from recent excavations of Eastern Han period sites and others presently in museum and private collections have been published.[1] One related group was designed with the characteristic eight “clouds” but combined with multiple bosses, dots, or “nipples” and sometimes referred to as yunxing or “cloud and nebulae” mirrors. Somehow, despite the stark and stringent geometric nature of the designs, the absolute antithesis of cloud-nature, the terminology embraces the notion that the heavens are reflected in these mirrors. From the Shang dynasty onward mirrors occupied a magical realm in Chinese society giving rise to a plethora of types with ornament whose meanings are sometimes comprehensible and at other time elude us, but which always give us pause to reflect.