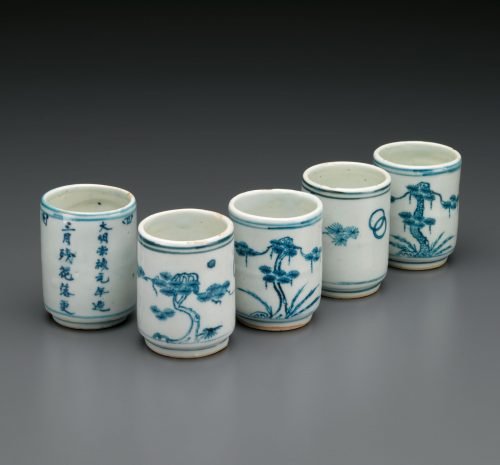 Late Ming dynasty
One cup dated to the 1st year of the
Chongzhen reign era, A.D. 1628.

Each porcelain cup is of cylindrical shape rising from an indented ring foot to a gently rounded lip rim. All of the cups are decorated in underglaze-blue. Four are painted with pine trees with dramatically down-swept branches, two of the cups with the tree rising from small clumps of bamboo and the other two rising from sharp fronds and each cup with a pair of intersecting rings floating to the side while one is painted with an additional small orb above representing the moon. Each cup is inscribed in underglaze blue on the opposite side with a poetic stanza consisting of four seven-character lines. The sides of the fifth cup are devoted exclusively to poetry, the characters written somewhat larger in size than the others and concluding with a date corresponding to A.D. 1628. A underglaze-blue double-line border circles the mouth rim and a single line surrounds the base and foot of each.

The poem on one cup reads:
‘Cuckoos cry through the deep of night.
Getting up, seeing silkworms abound, I worry if the leaves are scarce.
Heartless moon over the willows near a pavilion,
Beloved one, singing and dancing, will not come back.’

Two of the cups are inscribed:
‘River flows, flowers fall, both are heartless. Seeing off
the east wind, I pass the land of Chu. Butterfly dreams
of her home thousands of miles away.
A cuckoo cries on a branch; the moon shines at midnight.’

The final two cups are each inscribed with the following stanza, one concluding with the date:
‘The third month, the last flowers bloom and fall.
To eaves, swallows fly day by day.
Cuckoos cry as if bleeding through midnight.
Heartless east wind, being called, will not come back.’

‘Made in the first year of the Chongzhen (reign era) of the Great Ming.'[1]

The most reserved and least eccentric of the porcelain made by the Chinese for tea aficionados in Japan during the early 17th century are small cylindrical cups. These cups might serve as sake cups, as mukozuke (vessels for serving side dishes during kaiseki meals) or as tea cups, as they are in widespread use yet today for steeped rather than the powdered tea or matcha that required larger bowls for the whisking of the powder into the frothy beverage on which tea ceremonies centered. These cylindrical vessels were made in sets of five or multiples of five to facilitate service for larger parties. The cups were not distorted nor their shapes manipulated to produce surprising twists, eccentric or odd forms, or individuality. At most the cups would be squared or faceted (fig. 1). The decorative designs are likewise subdued. Simple yet attractive geometric designs were a clear and clean solution to decorating the cups and allowed them to blend easily into the greater picture provided by the tableware of the kaiseki service. Vertical stripes, a fan, an album-leaf painting, a moth floating against a blank ground, blossoms and floral sprays, horizontal stripes, a bird, a checkerboard pattern, and fish-net patterns were among the motifs included in the scrapbook of designs used by the kosometsuke decorator.

Four of the present cups are decorated each with an image of a single pine, very similar to one another and yet slightly different in dress and posture when viewed together, like a troupe of well-practiced modern dancers with minds of their own. The strong, expressively twisted trunks support down-swept branches heavily laden with clusters of needles, one tree beneath the suggested light of a tiny heavenly orb. The trees represented here are reminiscent of the Japanese black pine, a tree that flourishes in the saline soil and salty air of coastal regions, and a tree that was also perfectly suited to the art of bonsai, and whose dramatic branches were an inspiration to artists working with brush and ink on paper and silk, and with brush and cobalt on porcelain as well. An unusual example of kosometsuke actually portrays such a bonsai tree (fig. 2), whereas most depictions show the trees either as individual ‘dancers’ dominating a scene (fig. 3), combined with plum and bamboo in the traditional triumvirate (fig. 4), or as settings for other dramas (fig. 5). They might also have reminded the user of the Takasago tale that tells of the spirits of a deceased couple, Jou and Uba, eternally sweeping the needles from beneath the pine tree within which their spirits reside in Takasago, a theme actually presented in kosometsuke wares but with the couple the main focus of the designs. The long life enjoyed by pines in the wild, their ruggedness increasing with age, and their ability to withstand extremes in weather makes them the perfect symbols of strength and longevity. On cups such as these, however, they appear tamed; they have, in fact, become a bonsai in porcelain, trimmed at the will of the artist, captured in a moment out of which they will not grow.

The interlocked-circle motif provided an easy motif for the decorator to execute and at the same time an intriguing one for us to encounter, and one that appears frequently, especially in the world of Japanese ceramics for the tea ceremony (figs. 6-7) and their kosometuske spin-offs from China, including a single cup published in Japan which, like the present set, has a poetic inscription (figs. 8-9), and a plate with a purely geometric design (fig. 10). Placed on a desk next to the young prince who would become the Qianlong emperor (r. A.D. 1736-1795), in a painting by a Qing court artist, the pair of rings looks as if they might be playthings, something the prince might pick up and twist around in nervous hands (figs. 11-12). A pair of huangyanmu (‘boxwood’) interlocked rings made later in the Qing period is in fact described as ‘handling pieces’ but with a more important symbolic function (fig. 13). ‘Zhuang Zi in his Tianxia Pian (‘Essay on the World’) stated: ‘Linked rings are unlockable.’ The rings appear to be incapable of being separated; however, they cannot last forever, and there must come a time when they are broken and therefore unlocked. The very existence of the linked rings, therefore, demonstrates that they are separable, because their manufacture sets up the conditions necessary for their eventual separation. They thus form a symbol of the changeability of all things, the impermanence of all phenomena. Playing with them, the scholar is reminded of Zhuang Zi and his philosophy, and of the essential nature of the universe.'[2] We then have here not just the world in a teacup but the possibility of the entire universe in a set of teacups.

The poems appearing on the cups were not randomly chosen. Each refers to spring, two of them indicated by their titles, ‘Spring Evening’ and ‘Spring Dawn,’ and the third ‘Song of a Silk-worm Breeding Woman’ through its subject as silkworms breed in the spring, having feasted on the tender new leaves of the mulberry trees which sprout during the spring. The cups would thus have been used during tea ceremonies or gatherings during the springtime. Yet, despite the sense of joy and rebirth that the idea of spring connotes, each poem is filled with sadness and remorse, reflecting another side of Japanese sentiment, one that embraces rusticity, loneliness, desolation. The cups then were meant to contain more than wine or tea. They hold in their images and inscriptions multiple meanings that swirl together, manifesting the complex soul of tea. 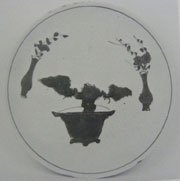 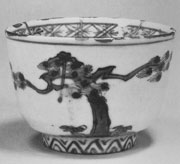 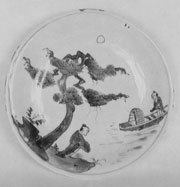 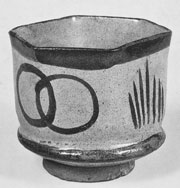 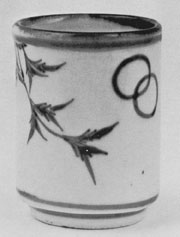 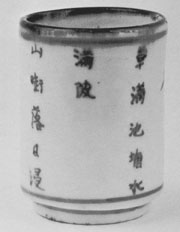 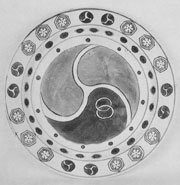 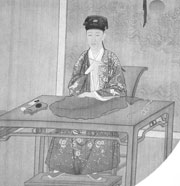