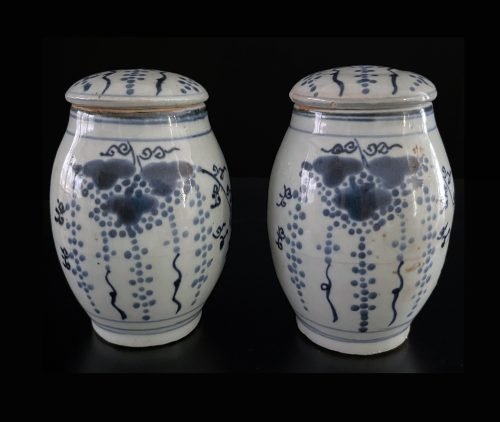 The two thin-walled porcelain vessels consist of ovoid-shaped bodies, each body constructed in two sections and luted horizontally, each supported on a delicate ring foot and surrounding a slightly recessed base, and each covered with a low dome-shaped lid. Stylistically the jars are stunningly transitional, balanced on that bridge between Ming and Qing, exhibiting the decorative style of late-Ming kosometuske wares destined for the Japanese market and yet shapes that are most in accord with porcelains produced during the very last years of the Ming becoming especially prevalent thereafter and found predominantly in the West.

The present jars are less bulbous in form, somewhat narrower in profile, and their size significantly smaller than the majority of early Qing vessels in which stout barrel-shaped jars with domed lids are a commonplace (fig. 1). The standard décor on those products, favored by “transitional” period potters from the late Ming to the early Qing at Jingdezhen and their clients, consisted of human figures engaged in various activities and often actors in themes literary or historical in nature, along with the landscapes that provided stages for the unfolding narratives, while landscapes alone might be subjects themselves.

Here, a simpler design on the bodies of both vessels front and back and on their lids focusses entirely on grape vines, their leaves, tendrils, and fruits–the leaves like gentle leaf-shaped blurs of blue, the grapes abstractly represented like hanging beaded tassels, and the tendrils delightful calligraphic flourishes. This subject is well-known from kosometsuke wares, the underglaze-blue decorated porcelains produced at Jingdezhen for the Japanese market, a classic example illustrated here (fig. 2) alongside a more modest rendition and close to the present pair of jars (fig. 3). The kiln grit adhering to the foot rings is also a feature of kosometsuke, but is known also as a feature of kraak underglaze-blue decorated porcelains produced for export. Interestingly, the unusual depiction of grapes is reminiscent of the pendent tassels in the designs of these same kraak porcelains.

The two jars, therefore, which upon first viewing seem totally unassuming, are the results of and serve as references to the complex world of Chinese export porcelain of the late Ming-early Qing era. 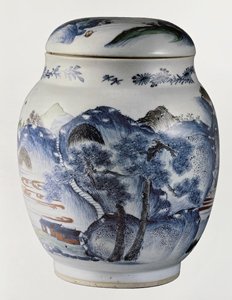 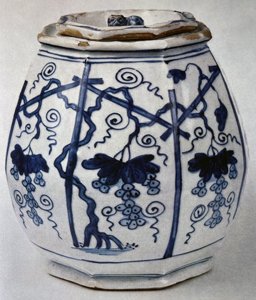 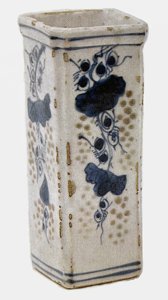