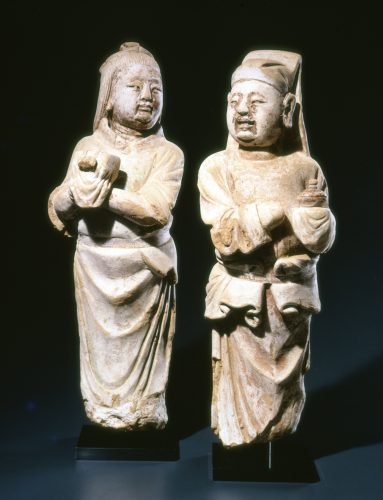 The stucco figures strike dramatic poses much like actors, and carry with good humor the necessities or frivolities of their privileged master, perhaps incense stored in a small covered vessel held by the male figure and some trinkets or tasty treats carried in the box carried by the female figure. Both are robust and portly, dressed in heavy robes, hiked and cinched at the waists. The female’s face is oval with full rounded cheeks, a scarf is tied round the crown behind her long hair that is pulled back and reveals an earring. The male’s face is squarish with a stronger chin. He wears a hat pulled across the forehead and draping a scarf behind. The bodies of the figures resemble sun-baked clay and retain traces of white, green and red pigment.

The stalwart bearing of these figures and subtle dynamism of their postures have much in common with a number of sculptural and painted images dating to the later 13th century, while their mode of dress and hair styles also conform to their time and their station. Note a male and female pair of servants illustrated here (fig. 1) painted at the entrance of the tomb chamber in an early Yuan period tomb at Jiaozuo, Henan province, while in spirit and sculpturally they relate to the ceramic entertainers for which the tomb at Jiaozuo is most famous (figs. 2). These profane images are related to styles present in Buddhist sculpture also of the early Yuan period, as exemplified in a figure of Guanyin dated to A.D. 1282 in the Cleveland Museum of Art (fig. 3). 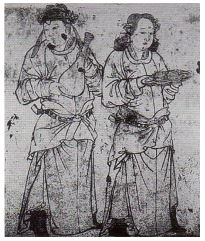