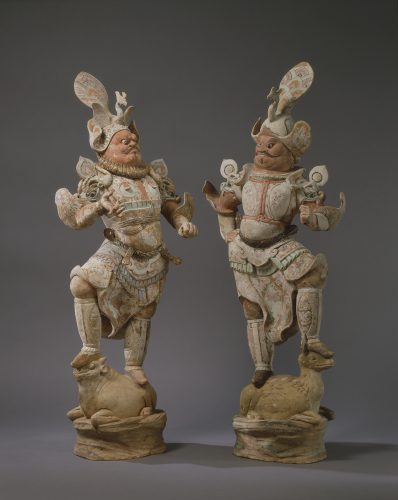 Each robust figure stands with one leg resting on the head of a recumbent animal, one on a bullock and the other on a deer, each animal raised on an oval rockwork base. The figures wear phoenix-form helmets and beautifully articulated armor that differ in detail but are similarly painted with red, green and blue colored floral, cloud and animal motifs. One figure is bearded and tight lipped, his beet red face ready to burst. His companion’s teeth are bared in contrast.

Tang tomb furnishings and entourages were fashioned for the elite to provide for resplendent funerals, ensure a sumptuous and safe afterlife, and maintain guardianship over the tomb. While the majority of paraphernalia was mundane in character, replicating the props of the actual life that had been lost, quasi-religious images had also become significant, the most stunning the figures of lokopala, the Sanskrit terms for the guardians of the four cardinal points of Buddhist belief. Known in China as heavenly kings, tianwangyong or tianwangshen, resplendent sancai-glazed and gorgeously painted unglazed earthenware figures vied in beauty, ferocity, drama and grandeur. Here the subtlety and precision of the painted designs on the attire and the carefully brushed details even in areas that would likely not be seen by a casual observer, suggest not only superb artistry but also how seriously such images were regarded, how real the spirit world and the afterlife were to the people of the Tang. 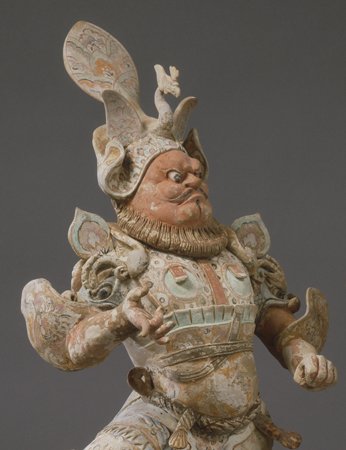