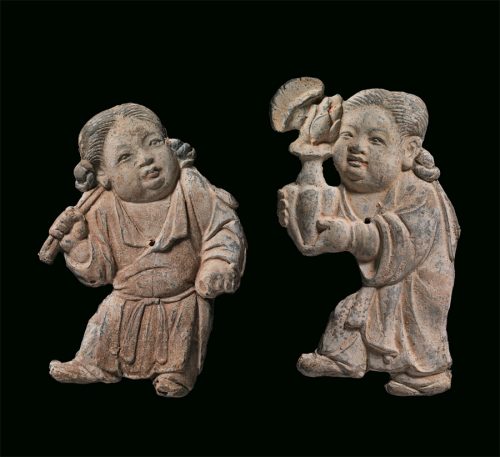 Each dark grey earthenware plaque is molded as a short, stout individual characterized by an oversized head and chubby face with high brow, broad nose, thick lips and smiling eyes, the thick hair parted in the center, combed back, and gathered and tied in double knots at the sides. The figures are each wearing a lapelled loose robe, one tied with a sash, the other revealing pantaloons beneath. One of the figures stands full face, the flower stem or scepter in his hand swung back over his shoulder, his head tilted as if something has caught his attention, and poised to stroll forward. The other figure is modelled in three-quarters view and grasping a lobed vase containing a lotus blossom and furled leaf, using both hands to steady the vase. The white pigment that appears to have covered the two figures, likely a base coat for further colors, has for the most part worn away but remains in certain areas such as in the creases of the clothing, fortuitously providing a stronger definition of the forms. Traces of red pigment are present on the cherubic lips. Each figure was pierced for attachment to a flat surface in the center of the reverse side where the coarse grey earthenware is clearly visible.

The departed were accompanied into their subterranean afterlives with furnishings and folk produced in all variety of materials. Over the millennia ceramic artists provided the greatest quantities of goods and necessities, ranging widely from the large storage jars of the Neolithic to the household and farm equipment of the Han to the horses, camels, and courtesans of the Tang to the funerary jars, incense burners and lamps of the Song and thereafter.

While the majority of works are free standing, during the Jin dynasty (A.D. 1115-1234)in particular, based on the archeological record, low-fired ceramic bricks cast with relief images of human figures including guardians, entertainers and attendants, in various sizes to conform to the available architectural spaces, decorated the walls of the tomb. The present jocund figures here, spirited and animated, are related to images excavated primarily in Shanxi province and are almost identical in style to some of the small ceramic bricks from an elaborately decorated tomb excavated in Xiangfenxian in Shanxi province (figs. 1-3).

The present were also likely members of a well-organized entourage providing dance, song, and conviviality, mounted to the walls and bearing with them the necessities and luxuries of a privileged afterlife. One figure here carries a lobed vase, quite fashionable at the time, and brings to mind a similarly styled ewer held by a figure in high relief discovered among others in an undated tomb in Jiaocuo in Henan province and attributed variously to the Jin and Yuan (A.D. 1279-1368) periods (fig. 4).[1] The Henan figure is a handsome adult and believed to represent an actor while figures such as the present were likely the images of dwarfs, valued as entertainers, musicians and acrobats, and thus most welcome in the afterlife of the elite.

1. The excavation report published several years after the discovery of the tomb in late 1973 dates the finds to the Jin dynasty (Wenwu 1979:8). More recently a Jin-Yuan date was suggested by Zhixin Jason Sun in James C.W. Watt, ed., The World of Khubilai Khan: Chinese Art in the Yuan Dynasty, Metropolitan Museum of Art, New York, 2010, pp. 54-55. Additional funerary ceramic tiles from a Jin dynasty tomb are also illustrated there (figs. 64-67, p. 53) and note is made that the type of performance represented in the tiles of this 13th-century tomb had taken place from the Northern Song period onward (p. 52). 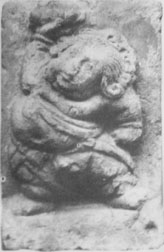 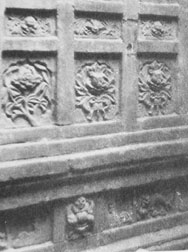 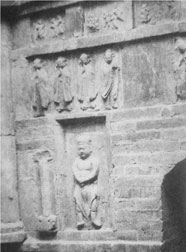 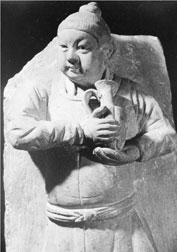