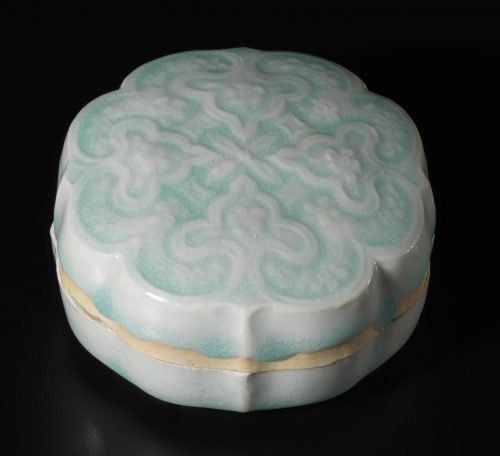 The cushion-shaped box is molded in the form of a quatrefoil with lobed sides and raised on a wide shallow foot ring. A complex and crisply molded design on the cover consists of a central four-petal flower enclosed by four floret-infilled trefoils all with raised double-line borders and with further floral sprays molded in the interstices creating an overall rich brocade-like pattern. The glaze is close to a turquoise color, especially where it drips down the sides of the receptacle, and thins to white where it drained away from the high relief areas of the design. The fine white body is smooth with a dry powdery texture as revealed on the unglazed base.

A bracket-foliate box and a jarlet with related bracket-foliate cover were both excavated in Anhui and are believed to have been produced there; both are attributed to the Song dynasty.1 Fujian province is well-known for imitation Jingdezhen wares produced at kilns at Dehua, precursors to the famous blanc-de-chine wares well-known in the West. Covered cosmetic boxes were among these products and it is believed that numerous boxes exported to Japan during the Song dynasty were mass produced in Fujian. Dehua wares are distinguished from Jingdezhen ceramics by way of the unique character of their chalky white bodies, like that of the present box.

It is noteworthy that the design and decorative features of the box appear in such products of the Yuan period as a yingqing ewer exported to the Philippines and in a collection there today.2 The mold-pressed ewer is decorated with four trefoil points connected in a ring, similar to the present box lid, a design traditionally associated with a Mongol garment adornment called a “cloud-collar,” a design which, however, originated centuries earlier in China, at least by the Western Han dynasty when it was a prominent feature in lacquerware decoration. The device became most ubiquitous, however, in Yuan period design in China and if one imagines the pointed trefoils enlarged, they become frames for decorative designs, the kind commonly seen in blue-and- white porcelain of the period.

Another important feature normally associated with the Yuan period is the quatrefoil shape of the box, a shape represented in numerous media of the period, suggesting that a Yuan date of production for the present piece be entertained.

2. The ewer, from the Locsin collection, Manila, is in Margaret Medley, Yuan Porcelain and Stoneware, London, 1974, pl. 21A.