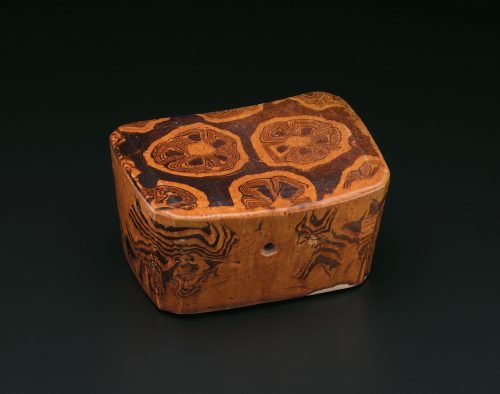 The pillow is comprised of six flat slabs of stoneware clay formed into a small, rectangular, closed box with canted corners, a relaxed profile, the base flat and the top slightly slanted. Each of the four sides and top were applied with thin layers of marbled clay produced by combining, through stacking and rolling, lighter and darker colored clays together. The marbled clay was worked to form a floral design on the pillow top consisting of repeated complete and partial geometric blossoms viewed from overhead and the sides to form what appear like tiger stripes or a wood-grain pattern. The sides and top of the pillow are coated with a rich, rather bright amber-colored glaze while the unglazed base is a pinkish-buff color. A small aperture in the front face was pierced to ensure a successful firing.

It is hard to believe when looking at the sides of this pillow that it was not a result of swirling together glaze and black slip into marbled patterns. But it was not. Rather, the visual effect was produced by marbling two different clays as the first step in this production. A damaged pillow illustrated here clearly evinces this (figs. 1-2). The wads or bundles of marbled clay were likely combined or twisted with additional plain clay and then cut to form the thin sheet applied to the sides of the pillow. This would account for dense marbled areas adjacent to substantial areas of plain clay. The tops, however, appear to have been created by setting marbled clay formed into blossom shapes into a flat slab of plain clay. Whereas the fronts and sides have irregular or random marbled patterns, the tops are clearly more organized and the images representational in effect. These pillows, along with two in the Boston Museum of Fine Arts (figs. 3-4) represent but one of several patterns produced by Tang period craftsmen. A pillow excavated from a Tang period tomb in Henan province, for example, exhibits, in contrast to these, a less organic looking design (fig. 5).[1]

Although evidence for the production of marbled wares has been found at Yaozhou in Shaanxi province and at Changsha in Hunan province, the main center of production is believed to have been in Henan province at Gongxian, where white and black-gazed stoneware and colorfully glazed earthenwares were manufactured during the Tang period. A shard from a marbled pillow with ‘blossom’ pattern similar to that here was one of the representatives of material from Gongxian shown in the exhibition of shards from Chinese kiln sites held in Tokyo and London some thirty years ago, an eye-opening exhibition for students of ceramics who had never before had access to such material (fig. 6).
The small size of these marbled pillows indicates that they were intended to serve as neck rests rather than headrests or as wrist rests for the calligrapher, and shards of such pillows have been discovered at ancient temple sites in Japan where they would have been used for the latter purpose. The inspiration for the marbled appearance was most likely a desire to imitate exotic wood patterns. So extraordinary, in fact, was the Tang fascination with ‘materials’ that Edward Schafer was inspired to devote much time and effort to elucidate the subject for us. In The Golden Peaches of Samarkand, which some of us were raised on, a bible of sorts written by our very own teacher in classical Chinese, Professor Schafer notes that ‘Early in the eighth century unheard-of heights of luxury were achieved in building and furnishing the mansions and palaces of the members of the imperial family and of the great aristocrats, and the important Buddhist monastic establishments. The demand for fine woods was enormous, and stupendous sums were expended to denude whole mountains to obtain them. These extravagant needs not only increased the consumption of native timbers but also brought the importation of foreign woods, especially colored and aromatic ones, to new heights. It became fashionable among the aristocratic classes to have everyday utilitarian objects made from such exotics, so that the households of the great reeked of tropical fragrance.'[2] Professor Schafer goes on to describe the importance of rose wood, certain types fashioned into ‘luxurious chairs and bedsteads’ and he furthermore notes that ‘The beautiful patterned wood was also desired for medicinal reasons: pillows made of it could cure headaches.’3 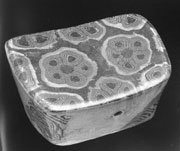 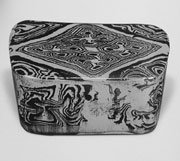 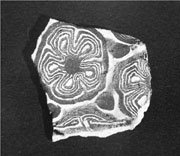 Fig. 6: A shard of a marbled pillow, found at the Tang kiln site in Gongxian, Henan province, after Kiln Sites of Ancient China: Recent Finds of Pottery and Porcelain, Tokyo, 1982, no. 370.