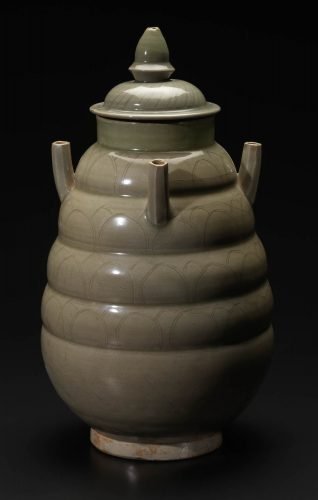 Chinese Ceramics in the Carl Kempe Collection, The Museum of Art and Far Eastern Antiquities in Ulricehamn, Ulricehamn, 2002, pl. 250.

The funerary jar is a very light grey stoneware in elongated ovoid form. It ascends from a slanted food to five cushion-like tiers in descending size, pagoda style, from the foot to the cylindrical neck. Each of the four uppermost tiers is carved with overlapping lotus petals in double-line outlines. Four faceted tubular spouts are applied on the shoulder producing a somewhat organic effect. The jar is covered overall with a greyish-green glaze aside from the foot rim and base which have burned reddish-orange in the firing. A hat-shaped cover surmounted by a lotus-form knob exhibiting a slightly darker glaze color on the exterior completes the form.

It has only been in relatively recent times that such funerary jars as the present are understood to have been produced at the Longquan kilns in southern Zhejiang province. Since these vessels appeared to be very closely linked to the Yueyao stylistic tradition, it had been assumed that they were products of the Yue kilns, until kiln-site excavations proved differently.1 A number of these urns closely related to the present form have been discovered with inscriptions on the lid interiors including one to 1070, another to 1078, and yet another to 1080.2 The main production sites were in Zhejiang province at Jincun and at Dayao in Longquan and at Shangyang in Qingyuanxian. It is believed that these spouted urns, which according to inscriptions and actual contents discovered, were for grain to be placed in the tomb with the deceased. This particular style of spouted offering vessel went out of fashion with the rise of the classic Longquan Southern Song period paired urns with their characteristic sea-foam green glazes and ubiquitous dragon and tiger sculpted around the shoulders.

1. See the discussion in the entry for a contemporaneous Longquan ewer in Kaikodo Journal XXVI, “Honored Guests,” Spring 2010, no. 48, pp. 108-109 and 190-191 where this problem is more fully discussed. Also seeKamei Meitoku, “Chronology of Longquan Wares of the Song and Yuan Periods” in Chuimei Ho, ed., New Light on Chinese Yue and Longquan Wares, Hong Kong, 1994, pp. 46-84.