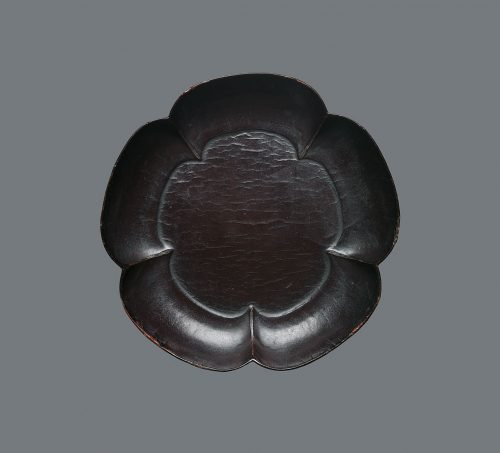 Inscription on base: zhixin (J. kono kokoro), ‘this heart’

Of light weight and shallow five-lobed form, the foliate interior of the dish rises to the curved rim, each petal delineated by a sharp raised rib. The curved sides of the exterior ascend from a delicate foot ring that surrounds the wide, circular, countersunk, flat base. The surface of the outer walls is in very good condition and quite luminescent. The interior, which would have experienced more exposure and use, is more matte and marked with a series of fine crackle lines that run parallel to one another. Inscribed on the base in thick red lacquer are the characters zhixin or in Japanese kono kokoro, ‘this heart.’

The lacquer artists of the Northern Song period (A .D. 960-1127) were among the beneficiaries of Tang craftsmen who demonstrated that the plain could be elegant, that shapes of utter simplicity could be refined, and that absence of flamboyant decor or refusal to impose any decor whatsoever could convey a sense of aloofness. Metalware, white wares and celadons of the Tang provided a foundation for this specific style of Song-dynasty lacquer ware. A similar dish published as belonging to a private collection in Tokyo is ascribed in general to the Song dynasty (fig. 1) while another lacquer dish like the present from the Freer Gallery collection (fig. 2) is actually described as having ‘a ninth-tenth-century flavor about it and may well be another manifestation of the lingering of earlier shapes in Sung lacquer.'[1]

Hin-cheung Lovell, the author of the quote above, illustrates a five-lobed silver dish from an early 10th century A.D. tomb, which is a corollary to the present lacquer piece. Stylistically these pieces, aside from the more common six-lobed formation of Song date, have everything in common with lacquer examples from datable tombs of the Northern Song period and those which are easily ascribed to that period.

During the Northern Song period, lacquer factories in Jiangsu and Zhejiang provinces became most prominent and hastened the style we see here to perfection; tombs finds in those provinces provide evidence for this reality. While lacquer wares was in daily use by the Song elite, their dinnerware, their ‘china,’ they also followed their owners into the afterlife and are thus well preserved today. The present piece, however, bears an inscription written in red lacquer by a monk in the Japanese temple where it is believed the lacquer resided (fig. 3). The Japanese would have appreciated not only the elegant simplicity of the shape and the luminous glow of the lacquer surface, but also the Song-dynasty craftsman’s nod to nature: the shape is formed like a perfect blossom.

1. Hin-cheung Lovell, ‘Song and Yuan Monochrome Lacquers in the Freer Gallery,’ Ars Orientalis, vol. IX, 1973, p. 126. The Freer piece differs from the present in the formation of its foot, which was made with five foliations. Further, its rim, and that of the Tokyo piece as well, are bound in metal. 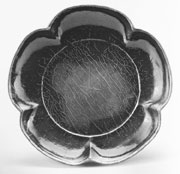 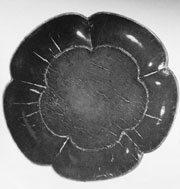 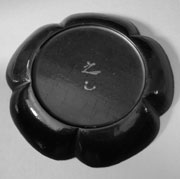