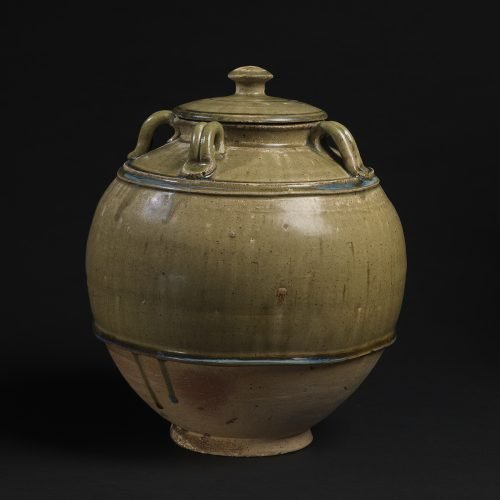 The expansive round body is anchored on a solid flared foot surrounding a concave base and is applied with four double-strand loop handles on the shoulder above a raised concave ridge. Another ridge toward the lower body forms the stopping point for the clear, crackled olive-green glaze that pools to a dark crystalline green with milky blue swirls on the horizontal ridges. Covered with a greyish-green glaze, the saucer-form lid is topped with a mushroom-shaped knob. Minuscule specks of black mark the light greyish-white stoneware body.

A migration of utmost consequence in the world of ceramics had its origins when Yue technology was established in northern Zhejiang province with its production of glazed stonewares of impressive durability in a plethora of forms and styles applicable to domestic and funerary utility and trade potential. Ceramic production was transformed at kilns in neighboring provinces and the move west and northward of Yue’s magnum opus impacted the future of ceramics there. Among the pre-Song manifestations of this migration are the northern celadons represented by the present handsome jar of the 6th century, among the predecessors of the Song-Jin wares of Shaanxi and Henan provinces, for which the name “Northern Celadon” was commandeered by scholars in the West especially for those wares.

The present jar can be understood through excavations of a cemetery in Anyang in Henan province published some twenty-five years ago where 29 tombs of the Sui period were uncovered.1 Among the tomb furnishings were a significant number of jars related to the present–all characterized by similar light grayish-white, hard stoneware bodies with black specks, clear, glassy, pale, olive-green glazes, glazing around half or two-thirds of the upper bodies and roughly above single horizontal ridges, with four double loop handles applied high on the shoulders. While the present jar is somewhat more bulbous and buoyant in effect than the Anyang pieces, it is quite akin to an example excavated from a 6th-century tomb in the vicinity of Xi’an in Shaanxi province.2