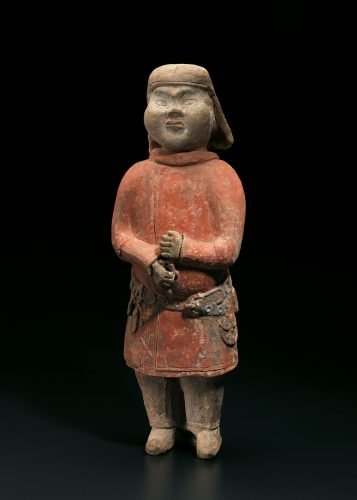 The heavy-set, full-cheeked earthenware groom stands with his fists held in front as if to hold reins. He wears a thick red coat with rolled collar over black pants. The garment is held closed, off center, by a low-slung leather belt with an elaborate clasp and grommets. A very detailed leather bag with decorative bosses is suspended from the belt on the left hip opposite small tools or trinkets hanging from the belt at the right hip. The figure’s face is wide-featured with traces of white pigment on and above the eyes below a seamed helmet-style cap with protective back flap.

The intrusion of foreign peoples into the lands and lives of the Chinese in the north, once hub of Han power, had far-reaching effects and one is before our eyes in the present ceramic sculpture. The military, along with grooms, attendants and entertainers inhabit the northern tombs as ceramic spirit objects and are, invariably, during this period of foreign rule, non-Chinese in appearance. The variety of ethnic groups hailing from Western Asia, Central Asia, Manchuria and Inner Mongolia was daunting, and although both Chinese and foreigner in China attempted to absorb and assimilate on some occasions and with some degree of success the other’s cultures, tastes and traditions, the foreign physiognomies remained as standouts.

Out of the potpourri of nomadic people occupying Chinese soil after the fall of the Han, the Xianbei, of southern Manchurian origin and an instrument in the fall of the Han, were able to wrest control of northern China from all other contenders, establishing the Northern Wei dynasty, which lasted from A.D. 386 to A.D. 535. Attended in life by their ethnic peers, the nobility took into the afterlife images of these indispensable individuals. Even as the Xianbei nobility made efforts to blend into Chinese society, adopting Chinese dress and customs, the physiognomies of the non-Chinese—whether of Xianbei stock or others among their numbers— stayed with them and are manifest in numerous figures sculpted for their tombs. The chubby cheeks, broad nose, bowed lips and wide eyes, along with the stout physique with belly spilling lightly over the belt and the donning of a hood are characteristics which suggest the present figure’s non-Chinese heritage.

A number of ceramic sculptures excavated from a Northern Wei period tomb datable to A.D. 477 in Datong, Shanxi province, the capital of the Northern Wei until its move eastward to Luoyang in A.D. 494, exhibit physical and sculptural features similar to the present (figs. 1-2) and, along with another figure of Northern Wei date shown here (fig. 3), a similar sculptural style and unaccessorized clothing, the latter with his long-sleeved tunic over wide trousers. The tunic on the bearded figure clearly folds across in front, is secured with a belt, and is finished with a high rolled collar. Red pigment remains extensively on tunics of figures of the Northern Wei period and contrasts to the trousers revealed below.

Ceramic sculpture and painting discovered in tombs datable to the Northern Qi dynasty (A.D. 550-577), the ultimate successors of the Northern Wei Xianbei before unification under the Chinese Sui dynasty (A.D. 589-618), reveal a continuation of both the sculptural style of the Northern Wei illustrated here and the imported style of dress current during the Northern Wei (figs. 4-7). The small pouches or purses hanging from the belts of the male servant (fig. 6) and the horsemen (fig. 7) are not unlike that of the present figure, who is also equipped with further paraphernalia that was produced with great clarity of detail and standing in high, sharp relief against the smooth surface of the groom’s body tunic (figs. 8-9). 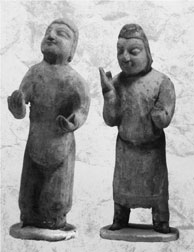 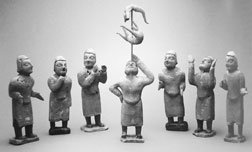 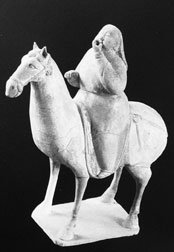 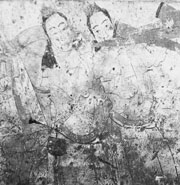 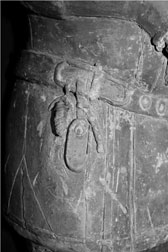 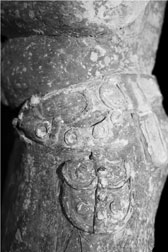