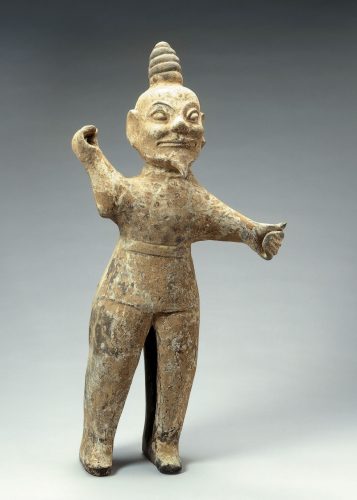 Hollow modeled, the forceful figure stands with feet firmly planted, his right arm in a spear- chucking position, the left hand curled into a fist with thumb extended as if holding a shield. The figure’s oversized head is characterized by its strong features: prominent cheekbones, a large nose, bulging eyes, thick lips, a faintly incised row of large square teeth, gigantic ears pressed flat against the head, and with a pointed goatee and the hair coiled up in a high bun. The warrior wears a simple belted tunic and wide pants narrowing to the short, boot-covered feet. The sculptural modeling of the torso, arms, and legs is rudimentary. Broad, bold, and simply articulated planes produce the figure’s great bulk and powerful aura. Extensive traces of white pigment adhere to the surface which would have originally been enhanced with further colors.

Warriors were a given in the tombs of the Chinese, keeping watch in the afterlife just as the individuals and battalions they were modelled after kept watch over state and empire. Armies and cavalries common in the tombs of the Han nobility, however, gave way during the early post-Han period to more modest keepers of the borders and peace of the underworld. Mingqi (‘spirit objects’), including retinues of attendants and guardians, narrowed in scope and number, a change in funerary style that signaled less extravagant and ostentatious proclivities in general during this period of political division, internecine warfare and depressed economies. A good number of tombs have been excavated in which furnishings were reduced to ceramic models of a single well, stove and small granary, some storage containers and cooking vessels, a small number of barnyard animals, an ox and cart, a chimera and a cortege consisting of as few as three human figures, a male and female attendant and the present type of guardian-warrior.

Although differences exist within this group of figures, found primarily in Henan province with the greatest concentration of tombs yielding such figures in the area of Luoyang, they form a single tribe. Bulky in physique, coarse and expressionless in facial feature yet threatening in posture, and all very generally modelled—any sense of realism or naturalism succumbing to simplification and abstraction, as exemplified by a representative figure from a Western Jin dynasty (A.D. 265-316) tomb in Luoyang, Henan province (fig. 1) and three figures from three separate tombs located in the same graveyard in Weihui, Henan province, one shown in photograph (fig. 2) as well as in an outline drawing along with the other two figures (fig. 3). Although the excavated examples are illustrated without shields, they were likely all originally equipped with them; another excavated example is shown without a shield in the image in the excavation report (fig. 4) yet one is included in the outline drawing of that same figure (fig. 5); perhaps the original armour in some cases made of a perishable material, or the original ceramic shield simply broken. Sometimes the figures are crouched down on one knee, as seen in an excavated example (figs. 6-7), another in a museum collection (fig. 8), and one in a private collection on one knee and brandishing a ceramic shield (fig. 9). This last figure is, interestingly, wearing a helmet as is another from the same collection who is also depicted wearing body armour, indicated by a lightly incised scale pattern, and his lips also pulled back to reveal a row of blunt teeth (fig. 10). A figure from a tomb in Yanshi, Henan province, is clad in similar armour and was apparently discovered with a shield but photographed without (fig. 11). One impressive example, from a private collection, is wearing beautifully detailed armour and helmet and has also has his teeth bared (fig. 12).

While the physiognomies of these figures suggest they represent non-Chinese, it has been conjectured that they are actually wearing masks and the figures themselves identified as shamen or exorcists.[1] In tombs undisturbed before proper archaeological survey, these figures were found at the entrance to the burial chamber, a position that would allow them to guard against both entries into and exits from the tomb. The designation ‘ guardian warrior’ is a reasonable one. This is supported by the body armour clearly represented on a good number of examples. The monumental size of the figure here—the others are no more than 60 cm. in height and the great majority much smaller—is extraordinary and renders this figure quite overpowering and menacing despite the absence of armour. Aside from their distinctive sculptural style, what sets these guardian-warriors apart from the usual ranks of military entombed with the deceased is their apparent engagement with the enemy, or, at the very least, their looking the enemy straight in the eye.

1. For discussions concerning the identities of these figures, see Ezekiel Schloss, Art of the Han, China Institute in America, New York, 1979, p. 51 where the example in our figure 8 is described as a shamen or tomb-guardian sorcerer, one of the ‘imaginary mythological guardians and not real warriors,’ and an association implied with sorcerers ‘who battled with demons to protect the living and also participated in the funeral procession with a whole retinue of lesser sorcerers to protect the participant from evil sprits and to descend into the grave to protect the deceased.’ Also see Albert E. Dien, ‘A Study of Early Chinese Armor,’ Artibus Asiae, XLIII 1981-1982:1-2, pp. 5-66, especially pp. 17-20; an example from the Tenri University collection in Japan is referred to as a ‘Spearman with Corkscrew Headdress,’ (pl. IV, fig. 22). 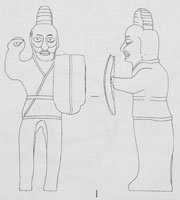 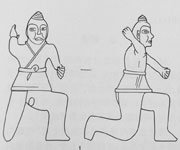 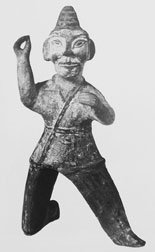