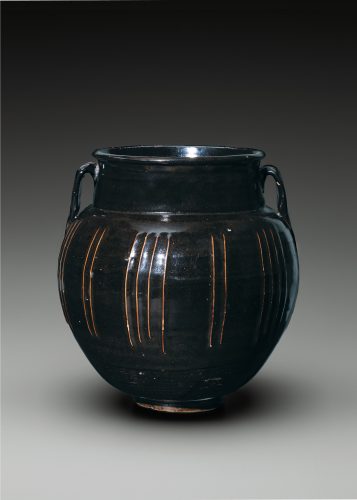 This classic jar is of swelling spherical shape with tapered neck and lipped rim supported on a square-cut foot. Two ribbed strap-handles looping from neck to shoulder on each side are molded with an inset square containing the character “Zhang” in thread relief. Two coatings of glaze, the second covering three-quarters of the body on the exterior and spilling over the mouth, were applied after ten groups of vertical white-slip ribs were laid onto the unfired vessel surface. After firing, the raised ribs show through the lustrous black glaze as decorative white lines. The sturdy light-grey-colored stoneware is visible on the unglazed foot surrounding the glazed base. Remnants of large spurs are visible on the bottom of the interior where another ceramic was supported during firing,

The prolific, creative, and no-less than phenomenal Guantai kiln in old Cizhou (modern Cixian), was the likely source of the present vessel. This handsome shape with its eye-catching decor was produced at more than one kiln in northern China. Although examples are found in collections worldwide, one feature of the present vessel stands out as quite unusual: the appearance of what must be the maker’s name molded on each handle. When we first saw this piece in Japan, we thought it unlikely that the name of the well-known ceramic pillow-producing Zhang family, who frequently signed their works by way of an impressed seal, could appear on such a piece as the present. Thus it came as no little surprise to discover that excavations at Guantai yielded a shard, an inscribed handle, similar to those on the present piece. In fact, shards were recovered from the site from which a vessel was reconstructed almost identical to the present.[1] Therefore, the handles here with the impressed name are neither unique nor questionable.

1. For illustrations of the excavated handle with impressed or molded name, Zhang, and the reconstructed jar see Guantai Cizhou yaozhi, Beijing, 1997, pl. LIV:1 (left) and XXV:1.