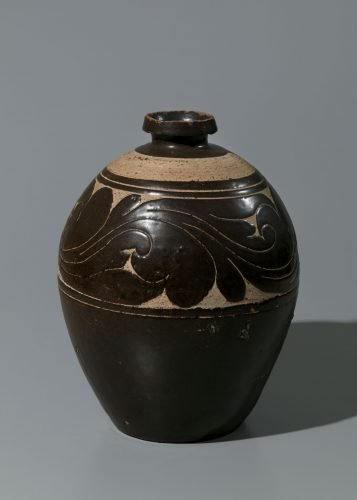 This boldly decorated jar is heavily potted and of ovoid shape, rising from a flat, wide ring foot with countersunk base, swelling to form an almost perfect egg-shape, and narrowing above to a constricted neck surmounted by a sharply articulated, conical mouth. A thick chocolate-brown glaze, smooth in texture and with a satiny sheen, covers most of the surface of the bottle except where the glaze was scraped away with a sharp instrument before firing to form the design and reveal the body below. Plump, scrolling foliate fronds occupy the wide upper body zone just above the midsection, this leafy decor framed by pairs of incised-line borders. The scroll is launched from a single point, emerging from the lower border of the panel and lumbering in heavy curves in a rightward direction, prompted by incised linear details that meander rhythmically within the frond-like excrescences. The glaze exhibits some irregularities—both from the firing many centuries ago and from chipping of the glaze through use or burial. The interior of the bottle was also covered in glaze, while the base, surrounded by a wide, flat foot where the coarse, light buff-greyish stoneware body is clearly seen, was also roughly swiped with glaze.

In a creative turn the decorator eschewed the absolute symmetry which more normally than not informs such designs. The scroll unusually originates on one side, representing an organic source, and then undulates in a rather spontaneous motion, the whole producing more of a sense of rough nature than of refined artistry. This effect is enhanced by the boldness of the shape and design, the coarseness of the body, the lively carefree imprecision of the outlines and the imperfections of the warm-colored, viscous glaze. The features that define the rugged aesthetic of this jar also point to its place of origin, likely somewhere in Shaanxi or further to the northwest, a prolific source of strongly potted and powerfully decorated black-glazed stonewares especially during the 13th-14th century A.D., and exemplified by several examples here, one excavated in Lingwu in Ningxia (fig. 1), another excavated in Tianzhen in Shanxi province (fig. 2), a third also from this area (fig. 3), and the last, related stylistically to the group, and published in Japan (fig. 4), where the present piece was also published exactly fifty years ago.

The Ningxia mentioned above refers to the Ningxia Autonomous Region where important stoneware-producing kilns were located during the rule of the Xixia dynasty (A.D. 1032-1227). The Xixia, a Tibetan Tangut group who had allied themselves with the Chinese Song dynasts, had established hegemony during the Northern Song period (A.D. 960-1127)in 1032 in northwestern China over sections of Shanxi province, Inner Mongolia and Gansu province and survived the onslaught of the Tartars who conquered the Song, establishing the Jin dynasty (A.D. 1115-1234). The ceramics attributed to certain kilns in Shanxi and Ningxia during the years of Xixia dominance are characterized by a certain roughness in materials and workmanship in comparison to wares from the central Chinese kilns. Characterizing one stylistic extreme is the removal of large areas of glaze exposing more underlying body than in cut- glaze wares from the central plains while at the opposite extreme some vessels are very simply decorated with lines scratched in the glaze to produce very spare designs. It has been noted by excavators that ceramics discovered in tombs and hoards in the region ruled by the Xixia are both of local manufacture and also imported from Northern Song, Liao (A.D. 907-1125), Jin, and some made after the conquest by the Mongols, who established their Yuan dynasty in 1207, conquering the north by 1234, and all of China by 1279. An individual example’s precise attribution then is sometimes not possible to determine with certainty. 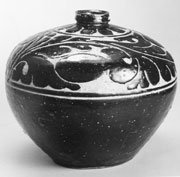 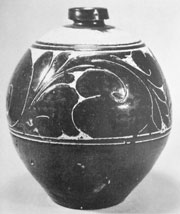