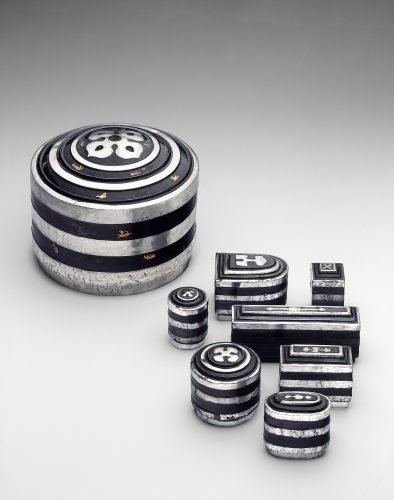 This set of lacquer boxes was intended to hold cosmetics and toiletries for the use of a privileged female living during the Western Han period. Her set consisted of a deep circular case into which seven smaller boxes were formed to fit snugly and safely: a larger and smaller round, larger and smaller rectangular, a small square, an oval, and a hoof-shaped box. The stepped box covers and each of the receptacle were belted with multiple wide silver bands and each cover applied with quatrefoil, trefoil or related silver medallions and all interiors coated in a deep brownish-red colored lacquer in contrast to the black color of the exteriors. The large case is decorated with appliqués intricately cut from gold and silver sheet in the shapes of birds and beasts real and imagined as well as humans of this and other worlds, each affixed to a ground of finely brushed scrolling lines in red and black lacquer, the delicately brushed patterns repeated on the smaller boxes.

Although comparable examples of individual boxes have been found in Western Han burials in Hubei, Anhui and Jiangsu provinces, similarly complete and intact sets such as the present are a great rarity. Indeed, the survival at all of such materials after two millennia is miraculous. This set was in fact acquired with some trepidation, as it was completely water logged, deteriorating, and in desperate need of rescue. Concerted efforts in conservation and restoration over many years in London and Cologne yielded the results observable here.

Kaikodo had acquired a second extraordinary set of lacquer boxes in the same condition as the first and, like the first, put them in the hands of the very talented restorer/conservationist Barbara Piert-Borges, who made an extraordinary discovery in the course of her work (fig. 1). To everyone’s great surprise, she found evidence of a technique in lacquer décor that was previously believed to have originated in Japan in the 7th century. She notes in an English summary to a lengthy article on the restoration of these pieces: “The dry lacquer technique of the body is analyzed and described. The gold and silver decoration executed in pingtuo-technique covering large areas between the wide silver bands anticipates lacquer objects from the Tang dynasty in its abundance. A silver maki’e decoration was found within the painted decorations surrounding and partly covering the gold and silver inlays. For the first time this technique, usually ascribed to the Japanese Nara period seems to appear on a Chinese lacquer object of the Western Han dynasty.”[1]

While creating lacquer wares for the elite, Han dynasty craftsmen exhibited not only extraordinary skill but boundless creativity and imagination as well. We are gratified to have saved some of their masterworks for posterity. 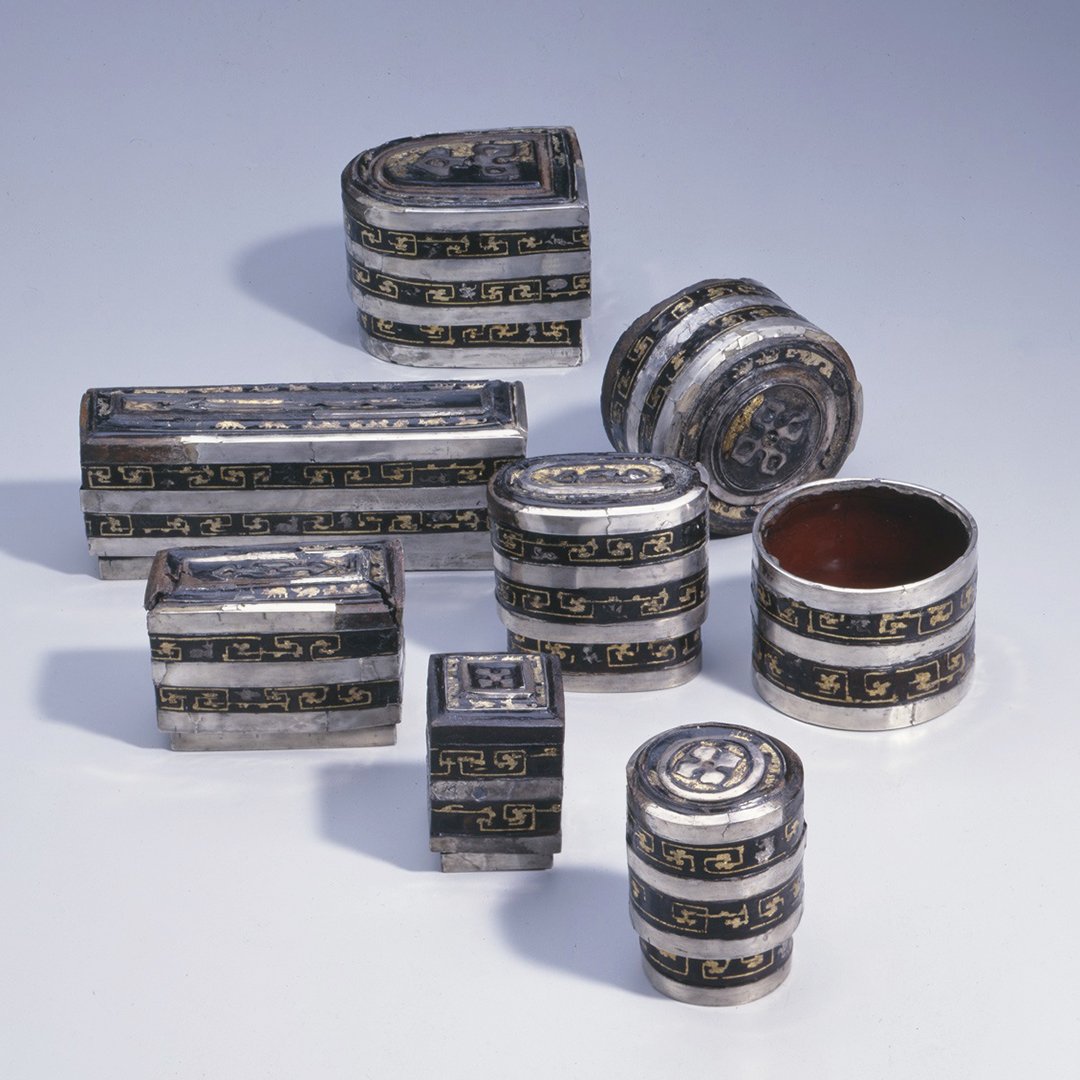