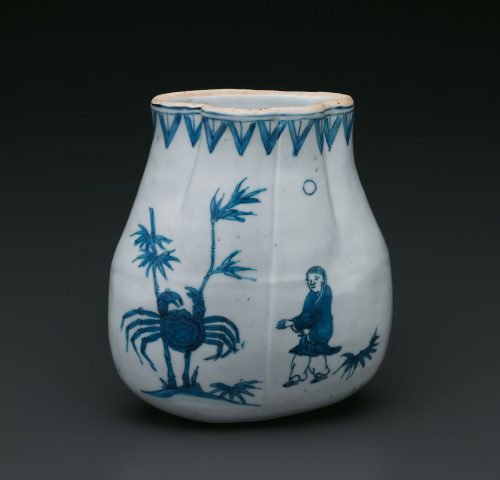 The porcelain vase is hand-built of oval section with a loot line running around the midsection, a flat back, and a rounded base. Modeled to resemble a cloth bag or woven basket, the vessel is tri-lobed overall, crimped as a pouch form in front to form four folds, one prominent central fold flanked by two short indents. Pendant leaves in simple triangular form are painted below the unglazed rim. A figure with fringed hair, a serious expression on his face, wearing a loose blue coat and white pantaloons approaches a large oversize crab scuttling up two bamboo sprigs. The scene takes place beneath a full moon. On the reverse is a freely drawn orchid spray with a single blossom and long sinuous leaves below a metal bar extending at a right angle from the vase suspending a loose ring for hanging. The design was created using an outline and fill-in wash technique and the blue has a thin, watery feeling and exhibits a greyish tinge. The glaze is bright and clear with some irregularities typical of kosometsuke.

This unusual form was inspired by the quirky needs of the Japanese whose imaginative journeys through a landscape of tea aesthetics resulted in Chinese wares of peculiar and even eccentric character made specifically for them. There are often no precedents in the Chinese tradition for the shapes they were called upon to produce for Japan during the early 17th century. Called kosometsuke, ‘old blue-decorated wares,’ in Japan, these late Ming Jingdezhen porcelains were subsumed and submerged in the Chinese mind within the general category of qinghuaci, ‘underglaze-blue decorated porcelain,’ and conveniently forgotten. The only value to the Chinese of these peculiar products was an economic one: by providing the Japanese with what they wanted, no matter how much against their own creative grain, experience, and values, the Chinese were able to at least partially fill the economic void created by the retreat of imperial interest in their wares during the final decades of the Ming dynasty (A.D. 1368-1644).

What the pouch-shaped wall vase has in common with other especially noteworthy representatives of kosometsuke wares is an unconventional shape, one with an off-centered orientation that seems, however, just right, and an understated design, one without pretense yet one that captures the imagination. It also manifests a guiding aesthetic principle behind its creation that has nothing to do with Chinese tradition and everything to do with Japanese concerns for the natural, the spontaneous, the imperfect and irregular, with intimacy, warmth, and charm… all expressed here to absolute perfection. When first encountering this particular piece, however, it is hard not to think that it is one of a kind, so eccentric its form and individualistic its features. However, a number of extant examples proves it was not, as shown here in the three other published vases with crab, bamboo, and boy decor (figs. 1-4). One other pouch-shaped vase is known to me and that decorated with the Buddhist icon Bodhidharma shown during his miraculous crossing of the Yangzi River on a leaf, the reverse of the vessel revealing in a quick and sketchy manner more of the Yangzi’s rough waters and an aperture where a metal hanger was once attached (figs. 5-6).

But what is the significance of the giant crab scaling the bamboo stalks? Is the youth standing nearby, the type of figure that often occurs in kosometsuke décor, as surprised as we are at the sight, or is he offering a helping hand, or is he contemplating catching the creature for a delectable feast? In the world of the educated elite, a crab climbing a reed symbolizes success in passing the examinations, the goal of goals in traditional China and the motif similarly meaningful to the Japanese.[1] Perhaps the bamboo here is an acceptable substitute for the reeds. At the same time, the crab is one of the numerous ‘seafood’ motifs that appear in these wares, sometimes shown, in fact, caught in a fisherman’s net (fig. 7). Although this might not be a joyful or humorous occasion for the netted creature, part of the joy of kosometsuke is the humor, the ‘not-taking-themselves-too-seriously’ air of the porcelains, even while the culture they served, the Japanese world of tea during the Edo period, was a very serious one indeed. In that world the present pouch-shaped vase would have been discretely hung on a wall within the tokonoma of a tea room, inviting the guest to partake in a contemplation of its qualities, of its appropriateness for the occasion, and of the significance of its charming decor. 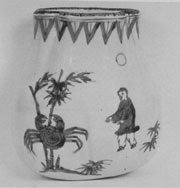 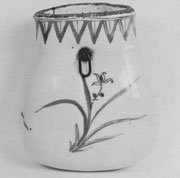 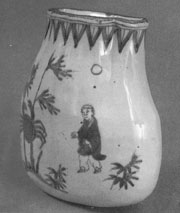 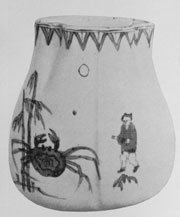 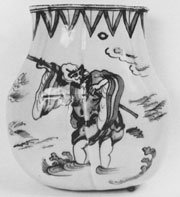 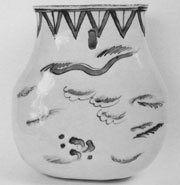 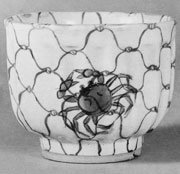