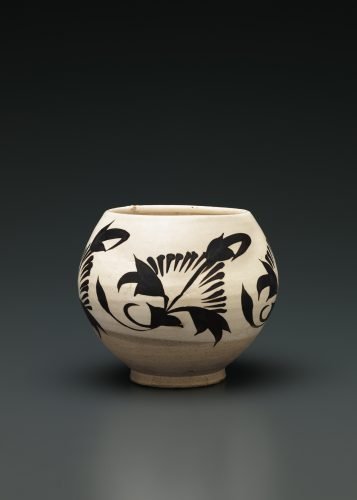 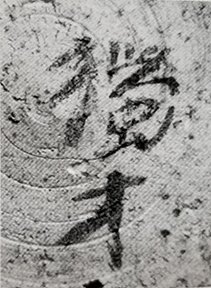 The perfectly potted jar is of ovoid form with walls swelling from a strongly cut foot and curving inward to the wide mouth. Before firing, the vessel was dipped in a white slip that covers the interior and stops well above the foot on the exterior. Four leaf fronds were painted with swift calligraphic brushstrokes in blackish-brown slip, visible beneath a somewhat transparent glaze. The pale buff ware is fine grained and compact. On the base are two large characters written in ink: ducai, “unique talent.”

Similarly decorated jars have been excavated at Guantai, one of the largest concentrations of kilns producing the popular slip-decorated wares known as Cizhouyao or Cizhou wares (figs. 1-2). Guantai is located along the banks of the Zhang River in Cixian, the current name of old Cizhou, a perfect environment for ceramic production due to the natural resources easily at hand and abundant. The earliest excavations in the 1950’s and 1960’s were augmented by work done in the late 1980’s, which was conducted more systematically than the earlier surveys and has led to a clearer understanding of the chronology and scope of production. Based on the results of those studies, the deep jars with floral decor can be ascribed to phase 3, datable to A.D. 1149- 1219, that is during the mid to late Jin dynasty.

The present jar, which represents the vibrant, “colorful” life of the Cizhou experience parallel to the more subdued monochromes of the time, was illustrated as a comparative example by Yutaka Mino when publishing a jar then in the collection Mr. and Mrs. Stanley Hertzman of New York (fig. 3).1 At that time the jar here was in a Japanese collection and has just recently been acquired in Japan by Kaikodo. The double wooden box that was constructed specifically for the vessel gives us some indication of the value it held in the eyes of the Japanese who embraced it over the years, and likely centuries.

1. A good number of this handsome type are extant, including examples in the Barlow collection, University of Sussex, published by Michael Sullivan in Chinese Ceramics, Bronzes and Jades in the Collection of Sir Alan and Lady Barlow, London, 1963, pl. 56a, and in the Asian Art Museum of San Francisco published by Mary Treager in Sung Ceramics, Fribourg, 1982, p. 181. 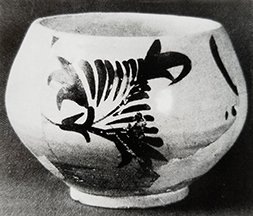 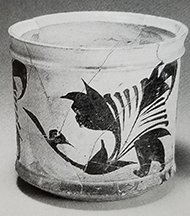 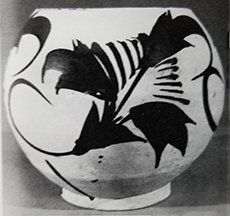