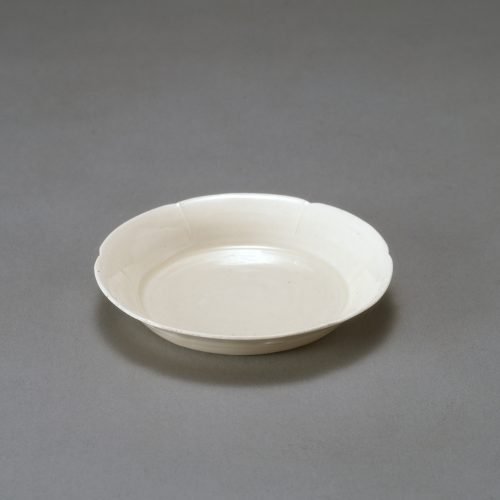 Thinly potted, delicate, and feather light in weight, the rising walls of the shallow dish angle outward to the slightly flared notched rim, a thin filament of white clay extending down the interior from each of the six notches, giving the impression of a six-lobed vessel, covered overall, aside from the lip rim, with a clear, colorless glaze over the refined white body, three “teardrops” descending toward the mouth and the unglazed mouth rim indicating that the piece was supported on its mouth rim during firing.

This well-traveled classic early Song period saucer was a product of the Ding kilns of Hebei province in northern China, was collected in Amsterdam, then in 1992, twenty-seven years ago, the dish was taken to Japan and eventually to New York where it has waited patiently, with hopes that it would at some point come into the possession of a Chinese collector who could return it to its homeland.

The Chinese began producing white stonewares during the 6th century and from the Tang period onward a number of kilns were making the popular ware, many in emulation of the wares that had achieved greatest fame, Xingyao in the Tang, followed by Dingyao in the Song. The present dish represents one extreme of the white ware spectrum, with an emphasis on purity and reserve, similar to an important category of Song lacquer ware and suggesting that influence upon the ceramic wares.