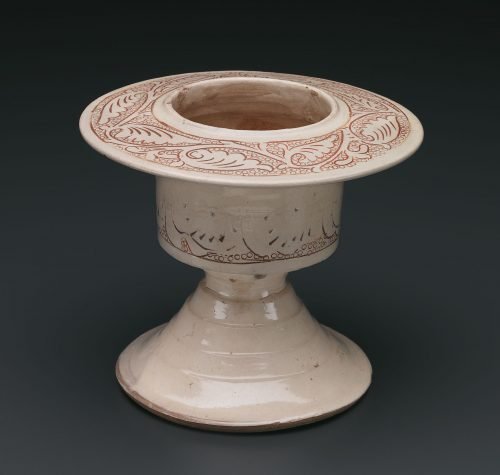 Of balanced proportion and dramatic profile, the lamp has a cylindrical body with a thin perpendicular rim extending just beyond the corresponding stepped, conical foot. The exterior of the piece was slip-covered before the design was executed, the rim containing the main design: a carefully incised scroll with large scalloped leaves along with smaller trefoils on a ring-punched ground. The same ground of small circlets is visible toward the base of the midsection where the pendant-leaf decor is obscured, the incisions not quite penetrating the thick cream-colored slip. A reddish-brown pigment was either stamped or rubbed into the circlets and incisions of the scroll pattern and the whole covered by a clear colorless glaze. On the interior of the lamp and inside its hollow base the pinkish-buff ware is revealed.

The extensive remains excavated from the Cixian (or Cizhou) kiln at Guantai in Hebei province indicate that the intriguing form here, referred to in old studies as a tazza and by the Chinese as either lu (‘censer’) or deng (‘lamp’), was likely a product of that kiln. Along with shards and reconstructed examples of such related censer s or lamps found at the site (fig. 1 ) was a relatively complete piece decorated with a scroll very similar to the present (figs. 2-3).

The popularity of this shape treated in the sgraffiato (incised-slip) manner is suggested by related examples found in tombs further afield (fig. 4) which could have been imported from Guantai or, in some cases, made locally. This distinctive and specialized form was, in fact, produced at a great number of kilns including those established in Hebei, Henan, Shaanxi, and Shanxi in the north and Jiangxi, Fujian, and Guangdong in the south. The variety of stonewares and earthenwares, along with the range of decorative styles in which these lamps or incense burners were produced is comprehensive, ranging from undecorated, pristine examples of white and black-glazed to lively painted and sgraffiato slip-decorated stonewares to colorful sancai polychrome and amber and green glazed monochrome earthenwares to celadons and yingqing-glazed wares. However, form often trumps color, glaze and decor, so powerful and distinctive its character. One undecorated example is of particular importance due to its discovery in a datable context, that is, the white-ware example from a tomb dated to 1052 in the Fengtai district of Beijing (fig. 5).

The sharpness of profile of the present type, the complexity of its parts and the simulated metal ring-punch background decor point to metalware prototypes. This is supported by extant metal censers and the appearance of the implement in early paintings. In the discussion of a sancai censer of this form presented in an earlier Kaikodo Journal, I remarked ‘The ring- punch ground of the sgraffiato decorated example in the Idemitsu Museum …. was inspired by Tang metalwork, which was the likely source of the crisp, dramatic shape in general. The long-handled bronze incense burners preserved in the Shōsōin (the mid-8th-century repository in Japan)…. have cups with the reverse-curve sides that characterize many of the Cizhou and Northern Celadon ceramic examples. These implements are often depicted in paintings in association with Buddhist monks and ritual…..and one, in fact made of stone, was discovered in the buried treasury of the Northern Pagoda in Liaoning province datable to the second half of the 10th century…..A figure depicted in a Buddhist painting of around the 13th century ….is holding one of the long-handled implements, while another is shown with a vessel in hand similar to the present tazza shape but most likely representing a bronze version such as one now preser ved in Korea……Bronze incense burners of this particular form do not appear to have been produced any earlier than the ceramic versions and the two likely evolved together from the same Tang precedent.'[1]

Examples of a dated metal Korean censer related to the ceramics examples, as well as a Tang metalware handled censer, and a somewhat later stone version are illustrated here (figs. 6-8). Little did we know that the Idemitsu piece would at some point be part of the Kaikodo inventory. It might also be noted that the reference to ‘Chu-lu hsien’ (Zhuluxian) in the Mayer auction catalogue entry most likely was information provided by Walter Hochstader who had acquired a good number of pieces when he was in Beijing that were coming out of Zhuluxian, an area destroyed by a great flood of the Huanghe (‘Yellow River’) in A.D. 1108. Mr. Mayer was one of Walter’s important clients and Walter was likely the dealer who made this splendid tazza available to the collector. 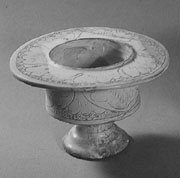 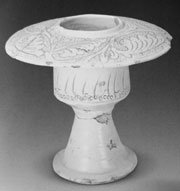 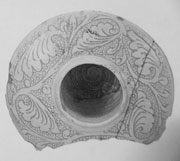 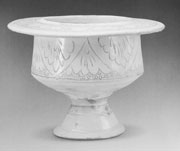 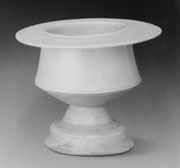 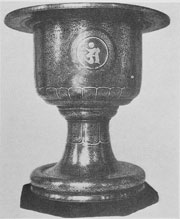