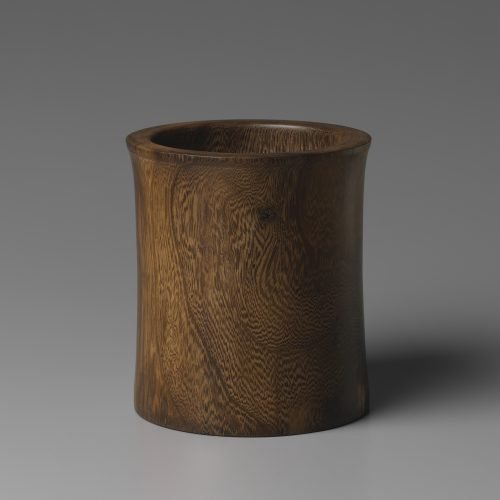 Brushpots are containers, usually cylindrical in shape, intended to hold the painting and calligraphy brushes traditionally used in Asia. Although such materials as jade and porcelain were used to produce these necessities, wood and bamboo were the materials that appear to have been most popular. The natural features and qualities of various types of wood and bamboo lent themselves perfectly to that side of the literati character that prized nature and found value in a reserved, reclusive meditative deportment.

The present Chinese wooden brushpot is made from what is popularly called jichimu, or “chicken-wing wood.” In botanical classifications the wood is of the Ormosia genus, indigenous to Hainan island, and is notably less dense than such hardwoods as huanghuali or zitan. Often the brushpots produced from this particular wood are left plain allowing the natural feathery grain pattern–which appears like the wing feathers of birds and hence its common name–to carry the aesthetic message. The cylindrical form flares slightly outward at the top where the rim is somewhat thickened and typically the base was pierced in the center and the hole filled with a wooden spigot.