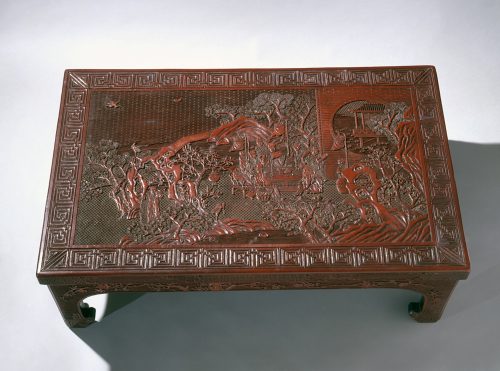 with the “Ten Disciples” Theme

The group of ten gentlemen—eight at the table and two about to join them—decorating the low lacquer table likely represents the Ten Wise Ones, the disciples of Confucius, who lived during his lifetime and were extolled by the master himself. Their primary occupation in the idealized setting of the table top is an engagement in examining and reading books. Such Confucian exemplars provided the subject for decoration in the minor arts and were primary subjects for painters, especially during the early Ming period when the emperors were most intent on recruiting the worthiest of men to serve under their new ruling dynasty. Usually the gatherings are generic, with members engaging in such activities as music, chess, painting and calligraphy, studying and enjoying antiquities, and drinking tea or happily imbibing wine. Here the deeply carved faces convey some sense of character and individuality while their postures are also varied and naturalistic. We feel as if we are indeed among an identifiable group of worthies, the earliest to whom later literati would look on as the backbone of their class.

The style of the present lacquer table has greatest affinity with carved lacquer produced during the mid to late Ming period and such extraordinary features as the “decorated” clothing and remarkable characterization of the figures are important characteristics of the carved lacquer of this period. Even what appear to be minor features—for example, the treatment of the pavilion roof tiles—associate the present kang with this period, quite distinct in comparison to what came before and what was to come later. It is noteworthy that this treatment of roof tops, as well as highly patterned clothing, was a characteristic of mother-of-pearl decorated lacquer beginning in the Tang and peaking in the late Song and Yuan periods. The renewed popularity of this technique during the 16th century might have had some profound influence also on the lacquer carver. Eccentric garden rocks were always a sine qua non of a scholar’s ideal environment and in the scene depicted here rocks pierced with large holes form a gateway, in appearance similar to the rocks in paintings from the later Ming period, a time when the wood-root chair also appears to have been a form of furniture cherished by the scholarly elite. 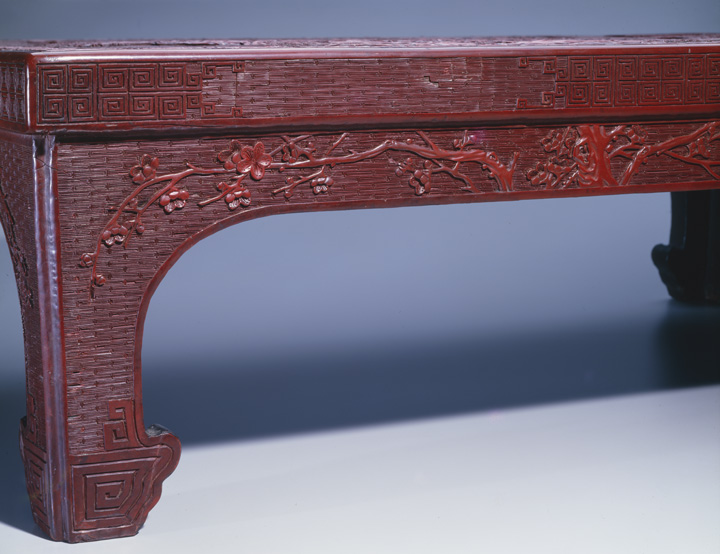 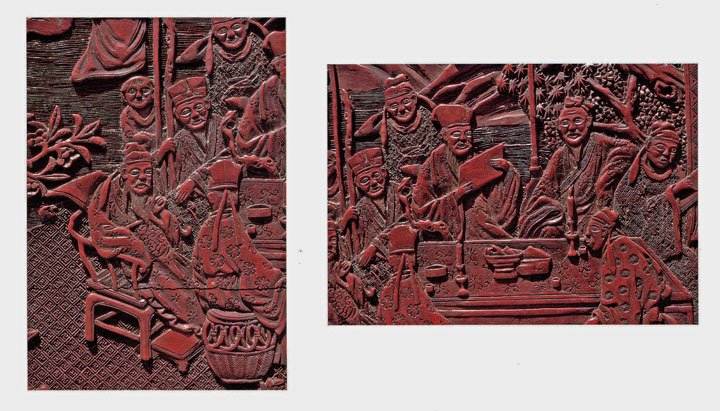