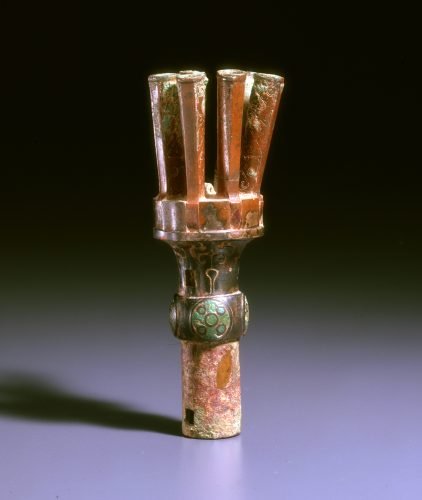 Only a fine chariot, one suitable to follow the owner into the afterlife, would have been constructed with such attractive detail as a parasol or canopy fitting inlaid with a semi-precious stone, such as the malachite used here. The cylindrical fitting is pierced with two small apertures for attachment to the canopy or parasol staff. The midsection is decorated with four roundels cast with circlets and inlaid with small chunks of malachite below intaglio geometric designs. A ring with hinges support eight faceted spokes each also with intaglio design, the spokes now frozen in place by encrustation.

Privileged individuals were protected from the elements by what must have been quite handsome canopies over their chariots. Parasols or canopies were not only important implements from a practical standpoint but also served to identify and direct attention to figures of rank and power and, symbolically, protect them from evil. This made the parasol perfect for inclusion as one of the eight emblems of the Buddhist faith. And the beauty and intricacy of this fitting suggest that journeys to the netherworld were done in splendid style with attention lavished on each detail of the conveyance.

Archaeological material dating from the late Zhou to early Han period provides actual examples of such devices that accord with the present, while contemporaneous painted images demonstrate the use of such canopies and parasols. Such material has ranged from discoveries from an 8th-6th century B.C. Spring and Autumn period burial in Shandong to the 4th century B.C. Warring States royal tombs of the Zhongshan kingdom in Hebei and the Marquis Zeng in Hubei to material from the 3rd century B.C Qin dynasty mausoleum of Qin Shihuangdi in Shandong to the Western Han tomb of Liu Sheng in Hebei and to the Eastern Han Wu family shrine in Shandong and Hunan’s Mawangdui painted banner and related contemporaneous painted images.