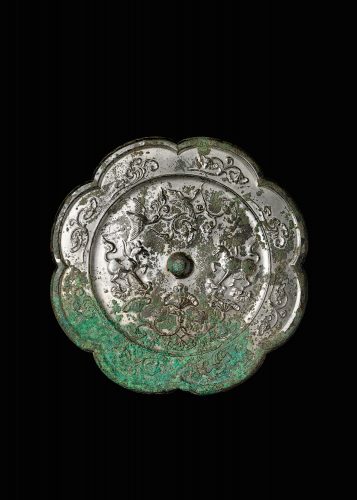 A Bronze Mirror
with “Celestial Horses”

The decorative design on the heavily cast mirror, with pierced hemispherical knob and a raised eight-lobed rim, is comprised of two confronting horses each balanced on a lotus blossom emerging from a furled lotus leaf, the stems entwined and joined in the center with a larger lotus leaf. The steeds rear back, each supported by an extended front leg, the manes and tails are swept up and the mouths open. A pair of geese are in flight above carrying scrolling lotus stems in their beaks. Clouds in thread relief alternating with pairs of streaming lotus stems decorate the wide rim. The silvered bronze surface has some encrustations of patina on the rim, crossing onto the lower left quadrant and distributed on the reflecting surface.

In the arts of the Tang dynasty the horse is a noble, fiery, limber, and wonderful creature. A medium hardly existed where it did not appear and more often than not as the center of attention. In the mirrors of the Tang, horses take to the skies, assuming powers to float on flowers and soar with the birds. Here they are imbued with a light, airy, and from a western standpoint, fairytale-like quality. And it was, indeed, horses from the West that were likely at the heart of this image. These were the “blood-sweating” horses brought to China from Ferghana, horses which became the most revered in the Han imperial stables and most important for the emperor’s military campaigns. These horses, unnaturally large compared to what the Chinese at that time were accustomed to, powerful and resilient on the hoof, were rumored to have descended from supernatural horses. A well-known bronze image of a “Celestial Horse” depicts the heavenly creature with head held high, mouth open and tail raised, and borne on the back of a swallow, the extraordinary piece from an Eastern Han tomb in Gansu province. While horses are actually a rarity on the Tang mirrors that survive today with animal decor—lions being the most prominent of actors on this stage, the mirrors so decorated must have been greatly desired and admired within the aristocracy, seduced by the magic and majesty of these celestial beings.